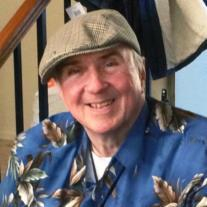 Joe Lavin passed away on Tuesday, November 3, 2015 at 66 years old. Born in Philadelphia Pa., he and his family moved to California in 1974.

Joe spent the last 46 years with his wife Diane. He is also survived by daughter Monica Ward, son-in-law John and granddaughter MacKenzie. Also surviving Joe are his sister Maureen Erthal, brothers Andrew Lavin and Thomas Lavin (Dee), and so many loving nieces and nephews. Joe was preceded in death by his parents, Andrew and Teresa, his brother John and sister Alice.

Joe will be remembered mostly as a courageous man who was kind as well as strong. He was a fighter who loved freely. He enjoyed celebrations, spending time with family and friends, music, going to the show, watching the Philadelphia Flyers and anything related to MacKenzie.

In lieu of flowers the family asks that donations be made to the Paralyzed Vets of America. A tribute has been set up under Joe Lavin. Donations can be sent to:
National Headquarters
801 Eighteenth Street, NW
Washington, DC 20006-3517 or Contact Madison @ 202/416-7778.