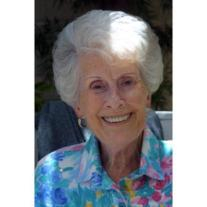 Joan Ruby Knight, 87, of Irvine, Calif., passed away on December 7, 2012, surrounded by family members, after a long battle with Alzheimer’s disease. She was a devoted mother, grandmother, sister and friend, and follows her beloved husband of nearly 56 years, Paul, who preceded her in death six years ago.

The youngest of four children, Joan was born April 7, 1925, in Des Moines, Iowa, to Taylor and Harriett Ruby, but came to California as a baby when her father moved the family to Los Angeles. She went to L.A. High School with friends that she still connected with annually until just a few years ago, and then attended UC Berkeley before graduating from UCLA. She held several secretarial positions before marrying Paul, and then took a hiatus after her daughter, Carolyn, was born. She resumed part-time work after her second child, Richard, entered school. Despite always saying that she only worked enough so she could “hire someone else to do the housework,” her nearly five-decade-long career included administrative assistant positions for many prominent professionals and executives including the well-known L.A. architect Henry Eggers in the 1950s, and Orange County technology leader Ted Smith in the 1970s, among others. She also was one of only four secretaries to have worked for Ted Geisel, a.k.a. Dr. Seuss, during his lifetime, and her grandchildren, Laura and Andrew, were always so proud to have her come to their elementary school classroom every year on the famous writer’s birthday, so she could tell the students about him, and what it was like to work for him. Joan always considered being a good wife, mother and grandmother to be her most important pursuits, however, and she was always actively engaged in her children’s and grandchildren’s lives.

In retirement, Joan and Paul were members of one of the Orange County Performing Arts Center fund-raising guilds, and she enjoyed publishing the organization’s monthly newsletters. In her leisure time, she enjoyed sewing, knitting, reading and attending Center productions and Pacific Symphony performances. She also loved to travel with Paul, including accompanying him on business trips over the years, and they joined their children and grandchildren on more than 20 annual spring vacations to Palm Desert. There were also numerous family trips in support of Paul’s athletic pursuits in his 70s, including his two successful age-group medal bids in international duathlon competitions. She and Paul also traveled to Europe with their children and grandchildren several times, to show them where Paul had been shot down in a B17 during World War II, and where he spent a year of imprisonment in the Stalag 17 POW camp.

Joan is survived by her daughter Carolyn, son Richard, granddaughter Laura, grandson Andrew, brother Preston and sister Allison. She loved her life with Paul, cherished being a parent and grandparent, and felt blessed to have had so many wonderful long-time friends. She always expressed deep gratitude for her rich and rewarding long life, and still was able to smile and laugh with her family even in the advanced stages of her illness.

A memorial service will be held at Irvine Presbyterian Church, 4445 Alton Pkwy, Irvine, CA, on Saturday, December 15, 2012, at 4 p.m. Flowers are appreciated and can be sent to the church; alternatively, donations can be made to your favorite charity or to the Alzheimer’s Association, P.O. Box 96011, Washington, DC 20090-6011, or on-line at www.alz.org/join_the_cause_donate.asp