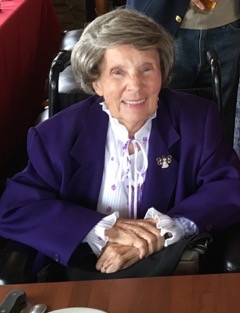 Joan Richards was born on March 19, 1924, on the feast of St. Joseph, in Brooklyn, New York. She was the second of five children of Charles and Augusta Tanke, who had emigrated from Austria. Joan attended Bushwich High School in Brooklyn and worked in various retail and administrative jobs before heading west.

At the age of 25, Joan moved to Los Angeles, California, where she met Robert Richards and married in 1954. They had three sons, Steve, Scott and James.

Joan was called the “sports mom” by all the boys because she was always driving her sons and their teams to football, basketball and baseball games. In addition, she was always volunteering at Holy Trinity Church and Grade School. Then in 1974, Robert Richards suddenly died and Joan had to raise three teenage sons by herself.

Joan, who had always been adventurous and bit of a daredevil, had a passion for flying. She went for rides in bi-planes, gliders and hot air balloons, along with her husband and sons.

After her sons began their careers, married and started families, Joan spent the majority of her time with her sons and their families. She relocated from Los Angeles to Canyon Country, CA, to begin taking care of her first granddaughter, Kristen, until she began attending school. With the birth of her second granddaughter, Veronica, she relocated from Canyon Country to Laguna Woods, CA.

Joan was well read and kept current on political affairs. She held firm opinions when it came to politics and religion.  And she was always already to have a lively debate on any of these topics.

As tough as Joan could be on certain subjects, she was the model of love and patience with her granddaughters. She could play hours at a time with the 4 year old grandchild dictating the rules.

Joan passed away peacefully on August 1, 2018, at the age of 94, with her family and caregiver, Lynn, at her side praying the Divine Mercy Chaplet. Joan will always be remembered as someone with a zest for life and a devotion to God.