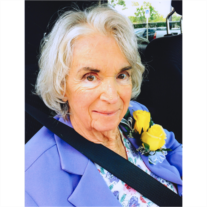 Joan Mary Coate was born on December 5, 1932 in New Paris, Ohio to Silvester and Marcella Williams. As a young girl, Joan worked in her family’s grocery store in Ohio until she graduated from St. Vincent’s School of Nursing. She then began her 50 year career as a Registered Nurse. Joan worked as a RN in Geriatric Care, NICU, ICU, Surgical, Labor & Delivery, ER, Psychiatric Care, and others.

She married her husband, Allen Wayne Coate on May 14th, 1955. The couple raised five children together; Janine, Kathy, Richard, Cindy, and Eileen. The family of seven moved several different times before settling in Irvine, California in 1974. After raising their five children, Joan and Allen then raised three of their grandchildren, Christopher, Jamie and Rebecca.

Joan passed away peacefully surrounded by family at the age of 84 on February 5, 2017 in Irvine, CA. She will be remembered fondly for her gentle disposition and unending love for her family. Joan is survived by Allen, her husband of 61 years; her 5 children, 13 grandchildren and 11 great-grandchildren.

St. John Neumann Catholic Church is allowing the family to purchase a bench to go in their garden/social area. Joan loved to sit in the garden after church so they would like to purchase this bench in her memory and share her poem, ‘A Healing Garden.’

In lieu of flowers you can send donations for the healing garden bench to be placed in the courtyard at St. John Newmann Catholic Church.
Donations can be by check or cash.
They can be given at the viewing, the funeral service or at the reception.