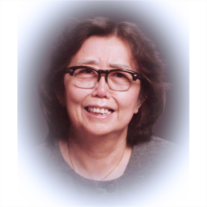 Xu is an accomplished and well respected painter and professor. She was born in July 4th, 1943 in an aristocratic family from Hangzhou, China.

Among the very few Chinese female painters of her generation, Xu continued her fine art studies by coming to U.S. in 1947, first attending the Nazareth Academy (now Spalding University) in Kentucky and then enrolled into the Chicago Fine Art Institute.

Xu returned to China in 1949, where she had been teaching oil painting in Fine Art Academy in Guangzhou until she retired in the 1990s.

Xu devoted her whole life to her paintings and her teaching. She had created a great amount of art works and many of her students have gained recognition domestically and internationally.

Jianbai met her husband, Xuesheng Tan (passed away in 2011), in the same Lin studio they attended, and he worked as the Dean in the same fine art schools with her over their lifetime.

After their retirement, they moved to U.S. to live close to their children. They continued painting until their last day and they donated many of their art works to the public and museums.

The entire service will be broadcasted in real time. Please contact O’Connor for invitation: https://www.oconnormortuary.com