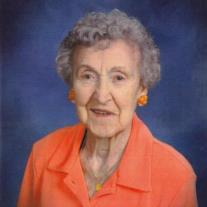 Jessie Larson, 97, of San Clemente, California passed away Monday March 23,2015. She was born December 1, 1917 to Otto and Effie Jenkins at home on a homesteaded ranch near the town of Sun River, Montana.

Jessie was married to Leonard Larson of Great Falls, Montana in 1936. In 1940 the couple moved to Grand Coulee, Washington and then to Richmond, California in 1953. She was widowed in 1975.

Upon moving to Richmond, Jessie went to a trade school to learn typing and shorthand and worked for a local equipment company before landing a job as an Administrative Assistant at UC Berkeley Department of Environmental Health. Her work career spanned some 24 years and she retired in 1979.

Jessie moved from Richmond to Laguna Woods in 1987 where she spent 20 years before moving to the Villas in San Clemente and finally spent her last year at a Board and Care in San Clemente. Jessie was always involved with her Church and actively participated in many volunteer efforts such as working at the Saddleback Hospital Thrift Shop. She is survived by her two children, five grandchildren and eight great grandchildren.

In lieu of flowers, donations in Jessie’s memory may be sent to The Braille Institute of America via www.brailleinstitute.org.

8 responses to Jessie A. Larson