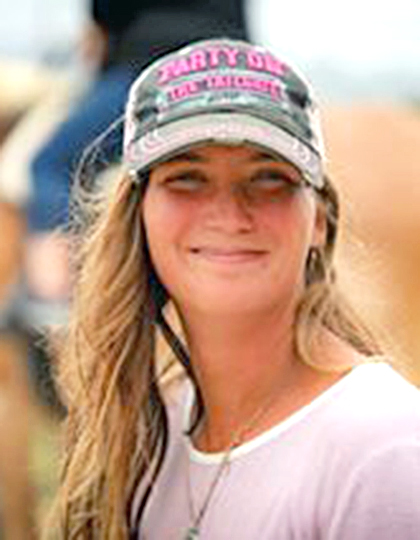 Jennie Kristina Alexandra Longfield was born as Christina Michelle Bell, in San Bernardino, CA, on December 26, 1995. Her early life was very difficult, which resulted in her being placed in foster care at the age of 18 months. The neglect she experienced prior to being placed in foster care was so great that those who saw her at that point in her life were of the opinion that it was a wonder she had survived at all. She was too emaciated to walk, and had no hair.

However, she was blessed with many “Earth Angels” , with one of the earliest being her foster mother, ” Mama Carolyn”. Mama Carolyn and “Daddy Fred” welcomed Christina into their home, and nurtured her into a beautiful little girl who could not only walk, but run, and who soon was ready for a new, forever home.  Mama Carolyn fought very hard for this to happen.

On November 1st, 1998, Christina came home as a foster child to  John and Robin, and their daughter, Sarah. On August 12, 1999, Christina’s adoption to John and Robin was finalized, and Sarah now had a little sister.  With her adoption, she also received the name Jennie Kristina Alexandra Longfield. From the beginning, she told us her name was Tina; and this was the name by which her new family called her.

Along with her new parents and sister, Jennie’s adoption also resulted in the gift of a cadre of grandparents, aunts, uncles, and cousins who all adored and loved her from the moment of their very first meeting, and to the present day.

Jennie grew into a smart, curious, and perceptive child, who was able to master complicated tasks such as learning to tie her shoes ( no easy task for the” leftie” she was)  ,and riding a bicycle (without training wheels) by merely observing someone else in the process of doing those activities. She loved the books “: Ten in the Bed”,  ” The Wizard of Oz” and especially “The Adventures of K’ton ton”, the Jewish Tom Thumb.

As she grew older, she became a very talented athlete, who was both fierce and fearless on the soccer and softball fields–with the injuries to prove it! Her uncanny ability to keep her composure on the pitcher’s mound caused one coach to dub her ” The Ice Queen”.  This was when she was only 9 years old.

Her early years of neglect resulted in Jennie developing  a syndrome called Reactive Attachment Disorder, which often caused her difficulty with relationships with people her own age. However, she never stopped trying. She was very tough that way .In many ways, Jennie was much, much older than her years, while also managing to be much younger  than her years. She was a very complex young  lady.

Another one of her many “Earth Angels” was her high school guidance counselor, Mrs. Halter-Day, who was truly available for Jennie whenever Jennie needed to speak with her–which was at times very, very often.  It is often said that ” It takes a village to raise a child”. In Jennie’s case, the village was  global in size, and all of the many members of her village were instrumental in seeing her graduate from high school ( Washington High, 2014) and complete

Some semesters of community college ( Riverside Community College)..  Her village also included a very extensive AA family.  One of Jennie’s proudest service activities while active in AA was being on the board of directors of  a sober living house.

While attending RCC, Jennie spent several months as a caregiver for her beloved ” Grandma Pool” during the last few months of her grandmother’s life. She drove from Colton to Lake Forest in order to be with her grandmother, and did not regret a moment of the time spent on the road going back and forth from place to place.  They developed a very special bond during this time. We are now comforted in the knowledge that Jennie and her grandmother are again together and having more of their treasured discussions.

When Jennie turned 18, she began to reunite with members of her family of origin, including her birth mother, her stepdad, and her siblings. Her biological father and a brother had  died prior to that time.

At the time of her death, Jennie was living in Oceano, CA, working as a trail guide on a horse ranch managed  by her stepdad, Ken, and living in her own tiny trailer, with her two dogs, Koda and Tidbit, as well as her 4 cats: Sallie Cat, Rudy, Mr Binxy,& Coco. . She absolutely loved her life on the ranch, and was happiest while  riding her horse, Cameo, on the beach or along the Dunes of Oceano..

Jennie passed away in San Luis Obispo, CA, on October 12, 2018, surrounded by family. In addition to her dogs, cats, and horse, she is survived by her parents John and Robin Longfield, her sister, Sarah Longfield, Uncle, Joe Longfield, Aunt, Myra Longfield, Cousins Dean (Jessica) and Michael Longfield, Uncle Jim Longfield, Aunt Merrie Longfield,and Cousin Luke Longfield, as well as cousin Andew Izumi.  She is also survived by her Uncle, James Woodruff, ( Uncle Jimmers). She is further survived by her “Midwest Family”, Uncle Larry and Aunt Judy Karlson ,  Aunt Geri Dunker, and Cousins Karen and  Keith Karlson. She is also survived by her Aunt, Jane Longfield, cousins Amy (Mike) Papinchock, and Becky Sweet, and their children Aubrey (Curt) of Colorado, Darcie (Matt), and Kyle (Aubrey Hope) and Kaley, of Terre Haute, and their children.  She also leaves behind a large group of friends in both the Inland Empire, and the San Luis Obispo/Oceano area, notably, Janet (another “Earth Angel”), Marcia, Angel, and Barbaradee. In addition, she is survived by her stepfather, Ken Napp, brother , Kenny Napp,sisters  Rhonda, Amanda, Samantha, and  brother  Rory; cousin Crystal, and other relatives related to her late biological father. In addition to all who she left behind, she left in every one of us, a broken heart so large that its mending will never be quite finished..She was loved deeply and there are just no words for how much she will be missed.

In lieu of flowers, Jennie’s family are respectfully requesting donations to the following charities:

3) The Guadalupe-Nipomo Dunes Center : www.dunescenter.org. Jennie loved the Dunes and spent many happy hours there.

Jennie’s family also wishes to extended their deep gratitude and appreciation for the assistance and support they  received from so many people  while they were in San Luis Obispo and Oceano: Ken Napp, Linda and Matt Schaefer, Issa, the ICU nurses and doctors of Sierra Vista Regional Medical Center, the San Luis Obispo Police Department, the San Luis Obispo County Sheriff’s department, and Lisamae of Reis Family Mortuary. They are also grateful beyond words for the presence of Joe and Myra Longfield and Sergio Cruz while Jennie was in the hospital.  The family is also grateful for the assistance of Denise Wittenberg and Luis Mata for their assistance in the days immediately after Jennie’s death. It truly took a village to shepherd Jennie to adulthood, and another village to shepherd her through her final days and to her final resting place. She mattered.