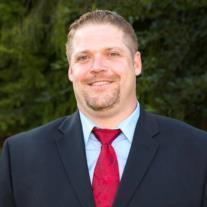 Jeffrey Lee Brown, 35, of Irvine, CA died November 17 from the devastating disease of ALS. He was born on February 19, 1979 in Yuma, Arizona. He graduated from Liberty University Law School in May of 2013, passed the California state bar and started working as a lawyer in April of 2014.

Jeff noticed weakening in his quad muscles in April 2014 and on July 8th was diagnosed with ALS. Jeff is the fourth generation to have ALS in his family, but the first in his generation and the youngest. It rapidly progressed and at his passing, he could only move a couple of toes and his neck. Through it all, Jeff had an incredibly positive spirit of patience, humor and love as he quickly had to rely on others to take care of his failing body. We praise God who allowed Jeff to keep his voice and the lines of communication open as he continued giving God all praise and glory and worshiping him until hours before went to heaven. Even to the hospice team that were with him when he left this earthly place, he sang, joked and continued to share his faith knowing he would soon be in the presence of the Lord.

Jeff also loved the law school and enjoyed being in the midst of others who loved the Lord and were seeking to fulfill God’s purpose in their lives. Jeff’s passion was to protect religious liberties. He took part in opening up the free legal clinic at Saddleback Church’s Peace Center where he had attended for 8 years and was active in a small men’s group.

His Celebration of Life will be held at O’Connor Mortuary in Laguna Hills, CA on Saturday, December 6, 2014 at 4 PM Pacific Standard Time. It will also be webcast to the Supreme Courtroom at Liberty University. If you are outside of the Liberty Campus and wish to be included to watch the webcast, please contact Nancy and leave your email address and she will get you the webcast information.