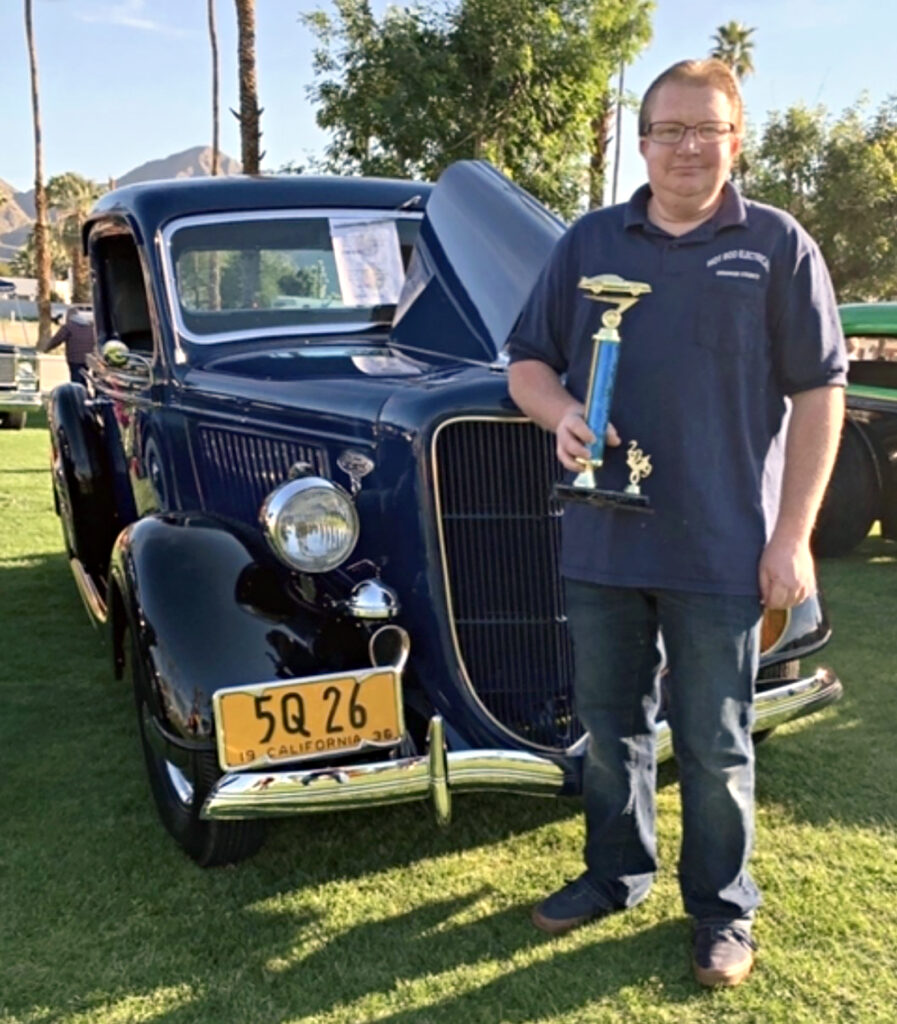 Jeffrey was the second born child to Craig and Michele Huntoon and their only son. He was an energetic child who showed early interest in taking his toys apart to see how they worked and quickly figured out how to rebuild them. At the age of 4, after constant earaches, he was diagnosed with Rhabdomyosarcoma (a rare cancer of the soft tissues) after finding a tumor is his middle right ear. He began a 2-year journey of Chemotherapy and Radiation that had him in and out of treatment at Long Beach Memorial Hospital, where he and his parents would often stay long nights and days between treatments. Jeffrey was well known and loved by all the nurses and doctors and would often show them how his toys worked or give them a handful of the hair he was losing as a gift.

As Jeffrey went into remission and the cancer was gone, his family celebrated his life and continued to help raise money for children’s cancer charities, including participating in torch runs, blood drives and helping other families going through the same experiences. Jeffrey was selected as a Starlight Children’s Foundation recipient and got the chance to travel with his family to Disney World in Florida for a week and also got the chance to fly for the first time on the Good Year Blimp in Carson CA. As he graduated Bixby Elementary in Long Beach, the school recognized his perseverance and incredible spirit in overcoming cancer by dedicating the new Kindergarten playground and Mulberry tree planted on the playground in his honor.

As a teenager, Jeffrey continued to show interest and extraordinary ability in automotive restoration and electronics. He joined the Auto Shop program at Millikan High School and decided to sell his beloved Go-Kart to fund his dream of restoring his own classic truck. He found a beat-up, rusted eyesore of a 1956 Chevy pickup in Signal hill and took on restoring it at the age of 15. Afterschool days were filled with grinding rust, Bondo, metal fabrication, and the time spent with his dad, Craig, turning this rusty monstrosity into a fully running and beautiful show truck. Jeffrey mastered all the customization and unique features the truck became well known for and in the process, started his own business fixing and wiring classic cars.

Jeffrey was featured in Classic Trucks magazine as their truck of the month and as an upcoming “Young Gun” in the industry. His company, Hot Rod Electrical, was born and Jeffrey started to make a living helping people restore and fix their classic vehicles. People would come to his parents’ house for work on their cars and were always shocked when this young kid walked out as the person that would be fixing their issues. Many doubted his abilities, until their vehicles were suddenly running better than before and the work he did was of better quality than anyone they had previously encountered. Word of mouth spread quickly and Jeffrey started to gain loyal customers who eventually became his life-long friends.

Jeffrey graduated from Millikan High School in Long Beach in 2002 and went to Long Beach City College for Automotive Technology. He continued to grow his business and attend car shows in his free time with his Dad Craig and their friends. They even embarked on a cross country classic car run called “Americruise” the summer after high school and drove his Dad’s 1932 Ford 3 window Coupe to Nebraska. Because of Jeffrey’s efforts, many cars were fixed along the way and no one in their group broke down or had to be towed home.

Jeffrey enjoyed traveling and would often take trips to Sedona with his family, Catalina for his Mom, Michele’s birthday and Las Vegas with his sister Kristin and future brother in law, Cesar. He loved to goof around and play pranks on his friends and family. He loved his cats and enjoyed spending time with them, especially all 3 Jeff Cats, who were named after him. He was a tremendous foodie and enjoyed trying new sushi and Mexican food spots especially. He was an old soul who was born in the wrong era, someone who loved Motown, old radios and longed for the nostalgia of the 1940s, 50s and 60s.

When he was 25, Jeffrey suffered his first stroke. He had a blockage in his neck arteries that they attributed to the radiation he endured as part of his cancer treatment as a child. He made some lifestyle adjustments and recovered well and continued to work on cars and do what he loved. Jeffrey also celebrated being in remission from the cancer for 20 years, which meant he was deemed free and clear from it returning. Jeffrey also decided it was time to build another classic truck and sold his 1956 Chevy to buy his next project, a 1936 Ford pickup.

In 2009, the Huntoon family decided to sell their home of 26 years in Long Beach and move to a new home in Laguna Hills, CA to have more room for all the cars and Jeffrey’s work and to prepare for Michele and Craig to retire from their jobs. Jeffrey enjoyed the change, especially swimming in the pool!

Jeffrey spent the next few years at the new house building and perfecting the 1936 Ford pickup, which he drove every week to Donut Derelicts on Saturday mornings in Huntington Beach and entered it into many shows all over Southern California. He eventually finished the truck with a beautiful black and blue paint job, the same colors as before, but this time the truck was truly show quality and he began to win awards at the car shows he attended. The 36 Ford was one of his greatest accomplishments and a true testament to his extraordinary abilities as a builder and classic car electrician.

In 2011, Jeffrey became an Uncle to his only nephew, Ethan. He loved being a kid with Ethan and showing him how to work on cars, shoot Nerf guns, slide down the stairs on their bellies, and play baseball in the backyard together. Jeffrey was never someone who enjoyed playing or watching sports, but for Ethan, he would play anything he wanted. His family often joked that Ethan and Jeffrey were the same age, just kids at heart having fun. They were inseparable, Uncle and Nephew.

But as he turned 35, Jeffrey once again suffered a stroke that took more of a toll on his physical and mental health. The recovery this time was slower and more difficult.

Before the world encountered the Covid pandemic and in the last month of normal life, Jeffrey had a bad car accident in his 1936 Ford pickup while he was alone driving to a car show in Palm Springs in February of 2020. The accident left Jeffrey suffering multiple injuries, including a broken sternum, and his head had impacted the roof of the truck so hard that it left a dent. The truck was totaled, and Jeffrey was left in both physical pain and the emotional pain of losing the truck he put his life’s work into.

As Jeffrey recovered slowly, his abilities to work on cars became more physically difficult, but as the survivor he was, he persevered. His sister Kristin and her husband Cesar asked to keep the totaled 36 Ford pickup so that it could be restored again and kept in the family. Jeffrey wasn’t up for another full restoration and instead, purchased his friend’s truck, a 1935 Ford pickup as a replacement. The beautiful black 1935 Ford truck was already an eye catcher, and Jeffrey sought to put his touches and updates on it such as a new interior and chassis along with his signature custom restoration of the radio.

In early 2022, Jeffrey entered his newly finished 1935 Ford Pickup into the NHRA Grand Nationals Show at Fairplex in Pomona, CA and won 1st Place in the classic truck category! Jeffrey deserved every ounce of this recognition and was excited for the next opportunity to show and enjoy his truck.

On June 3rd, 2022 Jeffrey came home complaining of pain in his neck. He had dinner at home but afterward felt dizzy and nauseous. He was suffering a brain aneurysm and lost consciousness and was rushed to the hospital. On June 5th Jeffrey was declared legally brain dead with no chance of recovery. Craig, Michele, Kristin, Cesar and Ethan made the heartbreaking decision to donate Jeffrey’s organs. In his final surgery on June 10th, Jeffrey’s life ended as he saved the lives of many others. He was still helping people and fixing things as he left this world. As Jeffrey knew better than most, a few spare parts can make all the difference in getting things running again. Jeffrey lives on in those he saved and within the hearts of this mother, Michele Huntoon, Father Craig Huntoon, Sister Kristin Ceballos, Brother in Law Cesar Ceballos, and Nephew Ethan Ceballos.

Jeffrey is in heaven with his Grandparents, as his best self and doing all the things he loved.