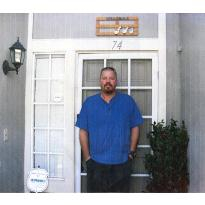 Jeff grew up around the film business with his Dad, Howard Magwood, and his Rose Magwood Productions commercial advertising and documentary film company of Hollywood, New York, Chicago, London, England and Toronto, Canada. Jeff loved movies, did some work in production and wrote scripts.

We admired Jeff’s great skill and love for the game of football where he played center position at Dana Hills High School and in high school county/state competition. He played football and rugby at Cal Poly State University and afterwards played rugby internationally. After graduation, Jeffrey worked as an English Instructor teaching English as a Second language at Aeon Intercultural Corp. in Kanazawa, Japan and traveled in Southeast Asia. Upon returning to the United States, he worked in business, most recently in a mortgage banking corporation.

Jeffrey is his families? beloved son, brother and hero. He will be greatly missed.

A Memorial service will be held at Laguna Beach United Methodist Church in Laguna Beach, California, on January 24 at 11:45 a.m.

In lieu of flowers a donation may be made with a check to the Laguna Beach United Methodist Church to be used for a homeless shelter and a children’s wheelchair ministry abroad, charities both close to Jeff’s heart. Please put notation ?Jeffrey Benton Magwood Memorial Fund? on checks.