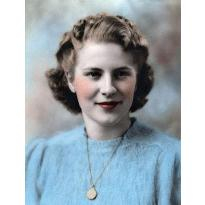 Jeanne was a loving wife, mother, grandmother and great-grandmother. Jeanne and her husband, Merrill farmed over 200 acres outside of Blooming Praire, Minnesota and operated charter busses until they retired in 1986. They then moved to California in order to be closer to their children and their families. She was full of life and loved to play bingo whenever she could.