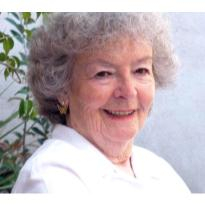 Jeanne is survived by her sons Ron and Jim; her grandchildren John, Kristine, Windy, Steven and Karrie Ann; her just-born great-grandchild Katherine Sora Spence; and her daughters-in-law Junko, Trina and Karolyn.

Jeanne lived a full life in her 90 years. She was a beautiful newlywed 23-year old when she and husband Phil headed west on Route 66 to California in their red 35 Chevy convertible. During World War II, while Phil was overseas in the Navy, she worked for a company producing liberty ships in Long Beach. She became an accomplished mother of three sons with a handsome hardworking husband and created a wonderful classic 1950’s California family in Anaheim near the Magic Kingdom. She was a Sunday school teacher, PTA member, cub scout leader and enthusiastic enabler of camping trips, beach jaunts, skin diving, surfing, skiing, motorcycling, racing and sailing adventures for our family. She was a fantastic cook. Growing up with Jeanne and Phil was a lot like some kind of new age Camelot for her sons.

After her sons grew up she worked for Penney’s corporate office for 10 years and became a more than occasional weekend mother to her grandchildren to further enable her sons many pursuits. We had a wonderful family and she was the heart of it. During this period Jeanne and Phil traveled extensively. They loved to travel and made numerous trips and saw the world. They loved their pets, which included numerous dogs, cats and birds over the years. Jeanne was especially close to her Papillion named Taco. She loved the dog so much that after he passed she got another Papillion and named him Taco as well. After Phil passed in 2008 Taco 2 became her dearest companion.