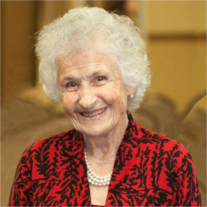 Jeanne Elizabeth Kloster (Roberts), 90, of Laguna Hills, California, beloved mother, grandmother, great grandmother, and sister, died on May 11, 2016. As was her request, she died peacefully at home and in her bedroom.  Jeanne had taken a fall on Friday, April 22, and broken her hip.  In previous weeks, she was weakened by pneumonia.  It was her wish to forego surgery, be at home and be kept comfortable.  In her last weeks, she enjoyed happy times with her children, grandchildren and great grandchildren.  Phone calls and Facetime brought her a chance to say goodbye to those who could not be there in person.

She was born on October 6, 1925 in Yakima, Washington to Jeanne Elizabeth Roberts and John Vincent Roberts.

Jeanne’s mother (Jeanne Elizabeth Mangin) was from the east Alsace region of France. Her father (John Vincent Roberts) was an American soldier stationed in Paris during the First World War. They met and after her father attended law school in Paris they were married and then he moved his French bride to the United States. They settled in his family hometown of Yakima, Washington where her father was active in the community and went on to help found Yakima Federal Savings & Loan. Jeanne had four brothers and one sister.

Jeanne was a very active woman. She enjoyed playing alongside her brothers climbing trees, playing baseball, swimming, roaming their fruit ranch in Terrace Heights, golfing, piano lessons, snow skiing, roller and ice skating. Her brothers learned to fly airplanes and she eventually took pilot instruction herself and owned her own airplane at one time.

Jeanne attended Seattle University in the 1940’s and she met her husband, Johannes ‘Babe” Kloster in 1947. Shortly after her graduation with a Sociology Major and Math Minor, she moved back to Yakima for a short period of time. She and Johannes were married August 7, 1948 when she was 22 years old. They moved to Spokane in 1949 where Johannes attended college at Gonzaga University. Within the first year of their marriage the eldest son (Gregory) of what would be seven Kloster children would be born. The next three children (Suzanne, Vincent, Mary Jo) would be born in the next three consecutive years and then the last three (Jeanne, Elizabeth and Margaret) would be spaced two years apart. In Jeanne’s first eleven years of marriage, seven children in all would be born. After finishing college, her husband started Kloster’s Camera Shop in the Richland area of eastern Washington State.

Her husband suffered his first massive heart attack in 1959. He and Jeanne were in the hospital at the same time. He was recovering from the heart attack which severely damaged his heart and she from birthing her seventh and final child (Margaret).  Jeanne bravely faced the inevitable for next two years while her husband tried to recuperate and heal. She began to learn the camera business while her husband, Grandmother Roberts, and others cared for their children. Her husband died of a massive heart attack August 8, 1961 at the age of 39.

In 1964, Jeanne moved her family to Southern California and began to work at Imperial Schools in September.  She earned her Master’s Degree from Cal State Los Angeles in Elementary and Secondary Education in 1969.  Jeanne worked in various capacities for the Worldwide Church of God for 31 years (September 1964 to May 1995).

Jeanne was blessed to travel to Africa, the Middle East, Europe, Australia, Fiji and most of the United States of America.  In her later years she especially loved her garden filled with roses.  She also loved playing board games; she was a formidable player of Sequence and Dominos.  She also loved perusing the internet and keeping abreast of world news and other topics of interest to her.

The most significant guiding light in her life was her faith in God and Jesus Christ. She was a student of the bible and immersed herself in the word of God. This zeal and drive filled much of her free time. She liked nothing better than to be given a topic to research for church articles and gathering information for the ministers.

Everyone who knew Jeanne knew how important family was to her. In addition to providing her children their basic needs, Jeanne provided her children opportunities to learn to be independent and resourceful.  She allowed her children to make their own choices, choose their own beliefs, and education.

Jeanne came to help with all 18 of her grandchildren when each of them were born.  Jeanne’s (Grandma Kloster’s) home was a fun place for her grandchildren.  In addition to her swimming pool, she had Nintendo and movies… the Star Wars series and every James Bond movie that came out.  She created many happy memories for her grandkids.

She had the house that people wanted to come to and visit and many came, and many even lived with her for a time. They became a part of her family, invited to every family gathering and holiday. More children than can be counted learned how to swim in her pool each summer. She is remembered fondly by those children she taught in school or at camp, took pictures of, colleagues she worked with as well as those she served.  She will be most remembered by her children and the many grandchildren she leaves behind. Whenever we eat waffles we will be reminded of the many weekends she would whip up from scratch the batter and homemade maple syrup and lovingly feed any and all takers.

Perhaps the most concise and succinct tribute is – we were truly blessed by her life and will continue to be.

In lieu of flowers, Mom had a couple of special charities…
Living Church of God, http://www.lcg.org
Olive Crest Foundation, http://www.olivecrest.org/donate/honor-a-friend/in-memory/