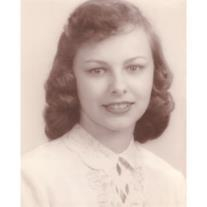 She was born in Milwaukee, WI on August 16, 1933 to Ella Selma Ehrichs and William ‘Ole’ Hartwig Olsen. She married her high school sweetheart, Jazz-man Herbert Clark Muth, weeks before he began serving in the Army during the Korean War. She was good with numbers and worked much of her life in accounting in hotels, churches and clubs. Her husband preceded her in death on April 3, 1986.

She was a sweet angel who had been motoring around the skilled care center visiting friends, sneaking out for peach margaritas with her kids, and spent her last Christmas with her family at the beach. She was a painter, voracious reader, gardener, and scholar. She was strong, determined and faced three separate cancers and won the day. She loved to volunteer and get involved including serving as a greeter at St. John Chrysostom. Jean was an elegant lady that made a difference in the lives of so many with her compassion, wit and charm.

Jean is survived by her daughter Cindy and son-in-law, Kevin; her grandchildren, Quinn and Colin; her son Steve and son-in-law, Francisco; her son David and her brother-in-law Charles De Muth. She will also be missed by her church family and her caregivers and companions at Lake Forest Nursing Home.

A Funeral Mass will be held Friday, March 6 at three o’clock at St. John Chrysostom Episcopal Church in Rancho Santa Margarita, CA. She will then come home to rest with her husband at Wisconsin Memorial Park in Brookfield, WI.