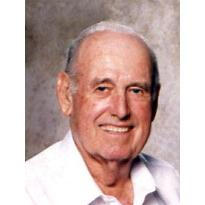 Jean-Pierre Lacouague was born on October 30, 1923, to Pierre and Bonifacia Lacouague at their recently acquired 261-acre homestead in San Juan Capistrano. The land was purchased from Cornelio and Ysidora Forster Echenique. John, as he was called, learned to speak Basque with his parents and Spanish, simultaneously, from the Mexicans in the area.

In 1928, he entered Mission School not yet speaking English. He was baptized at the Mission, attended school there for 8 years, and made his First Communion and Confirmation there. He went to Capo Union High School up the street, graduated in 1940 and enrolled at Fullerton Junior College. After two years, he entered Santa Clara University as a freshman engineering student.

Upon completing the first year at SCU, he entered the U.S. Army in 1942 at the Presidio in Monterey. He took basic training in Ft. Riley, Kansas, and then was enrolled in the University of Missouri at Columbia as an engineering student. Nine months later, he was assigned to the 1251st Combat Engineer Battalion in Camp Swift, Texas, where, after training inductees for 6 months, he was shipped overseas via New Jersey and New York to England.

Two months after arriving in England, he crossed the Channel to LeHavre, France, and immediately proceeded to the Battle of the Bulge in eastern France, Belgium, and Holland. The 1251st Engineer Group built the farthest north and longest Floating Bailey Bridge across the Rhine at Wessel. They bridged the 2nd Armored Division on their way north of the Ruhr pocket to the Elbe River en route to Berlin. The war ended on May 8th, 1945, and the 1251st was moved to Antwerp, Belgium, to build a redeployment camp for troops going to the Pacific Theatre.

After the Japanese war ended in August of 1945, the 1251st was assigned to Bavaria, Germany, to fix roads and bridges. John departed for home in April of 1946.

Rather than pursue further education, he returned to work the ranch with his parents and in 1951 married Marie Sansinena in Serra Chapel at the Mission in San Juan Capistrano. He built a modest home and raised four children: Danny, Michelle, Denise, and Renee, all of whom attended Mission School and later married at the Old Mission.

During his tenure operating 90 acres of oranges, he found time and dedication for the Volunteer Fire Department where he served for 27 years including 17 years as Volunteer Fire Chief. He also served on the Board of Directors of Consolidated Orange Growers, the Olive Heights Citrus Association, and, later, the Orange Heights Orange Association. Additionally, he was active in the American Legion Post 721 for 46 years serving most of those years as Finance Officer.

In 1986, the ranch was sold for development with the exception of five acres on the home hill where John later built a new home, retired, and lived the remainder of his years. It was the same land on which he was born.

Rosary Service, Tuesday, July 22, ~ 7:00 pm at the Serra Chapel on the grounds of the Mission Basilica San Juan Capistrano, CA. Visitation after the Rosary.

Mass of Christian Burial, Wednesday, July 23, ~ 10:00 am at the main church of the Mission Basilica San Juan Capistrano, CA.