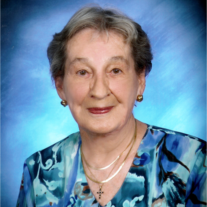 Jean was born in Namadji, Minnesota to Edmund and Gladys (Huffman) Leipold on September 30, 1924.

Jean graduated from the University of Minnesota accepted a teaching position in Worthington, Minnesota. In May 0f 1946, she met her future husband, Dwayne, who was a Marine fighter pilot home in Worthington on leave.

Jean and Dwayne were engaged within a week of meeting and were married six weeks later. Jean and Dwayne had five daughters, and she still found time to earn her Masters Degree from Cal State Fullerton! Jean was a teacher with the Santa Ana Unified School District for over 30 years.

Jean and Dwayne shared a passion for traveling, and toured extensively both abroad and across the United States. They moved to Leisure World (now Laguna Woods) in 1992. They became active members of Lutheran Church of the Cross. Dwayne was diagnosed with cancer in 1993 and died the following year. Jean mourned the loss of her husband and friend of 47 years.

Jean was a long-time member of the Daughters of the American Revolution (DAR), serving as Regent for 4 years. She also was a member of the College Club, Scandinavian Club, and a ten-year volunteer for the Historical Society. But, far and above, her favorite weekly activity was her bible study classes. She attended Bible studies her entire adult life, and daily did her devotions at home. Her love and knowledge of the Bible was legendary.