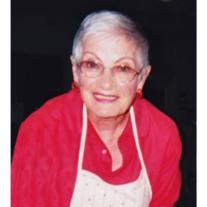 Grandma was the 2nd of 4 children born in Brooklyn, New York on December 21, 1918. She was a city girl and began work at a young age. She worked in a hair salon where she met and fell in love with the owner, Nino. She and Nino later got married and had a son together named Charlie. Through her marriage she devoted her time and love to her husband, son, and family business. When her husband became ill, she was the primary care provider for him for many years. When Papa Nino passed in 1989, both Charlie and Marie convinced Grandma Jean to come west. About 10 years after moving to California her only son Charlie passed away. Grandma was a strong woman having survived the great depression, and the deaths of her husband and only son. She endured thru these difficult times and moved forward with her life and has set an example for all of us to do the same.

In California, Grandma Jean flourished. She always liked to be busy and active. She became involved with the Senior Citizens Center in Mission Viejo and devoted countless hours to any and all projects that came along. She served on a nutrition program for seniors, worked with the “flower program” which consisted of re-crafting flowers for sick & needy seniors, and worked with meals on wheels for seniors. She also worked tirelessly in the kitchen at the Senior Center serving meals and helping with charitable events. One of her last and cherished memories of service was working on the float for the city of Mission Viejo for the Rose Parade. Working on a rose parade float was a long-time dream for Grandma. She sure loved working with her hands and crafting a small piece of that float! She and her close friend Dorothy even made the local news as the newscasters interviewed volunteers working on various floats; they couldn’t believe a 90 year old woman was volunteering time to work on a rose parade float. In her later years she was still a regular at the center where she visited with friends and took classes. Her favorite class was her “laughing yoga” class.

She loved her family to pieces and her grandchildren and great-grandchildren were everything to her. She was a fantastic cook and would make special dishes that we loved such as Thanksgiving stuffing and squash, pasta with marinara sauce and her infamous meatballs. Plus, she would always add a freshly cooked batch of biscotti, fresh fruit, or cookies to round the meal out. Chocolate chip cookies were one of the family’s favorites.

She’d get a kick out of giving dollars to the great-grandchildren; and kisses, lots and lots of kisses.

Grandma will be remembered for her one of a kind spirit and feistiness. She was nurturing, caring and supportive to her friends and family. She was loved and respected by all that knew her. We will cherish the memories, laughter, and good times we shared. We will carry her in our hearts forever.

She is survived by her daughter-in-law, Marie; grandchildren, Anthony (and wife Lisa), Nicholas (and significant other Beverly), and Chris (and wife Annie); great-grandchildren Theo, Hunter, Christopher, Shayne, and Randi; nephew, Gary, and niece, Madelena.