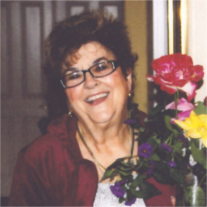 Chudomelka, Jean Ann of Mission Viejo, California passed away peacefully November 20, 2016. She was 86. She was preceded in death by her husband Jerry Chudomelka. Jean is survived by her 4 children, Jerry Michael of Mission Viejo, Jane Jackson of San Juan Capistrano, Jeanne Carpenter of Coto de Caza and Jill Escalante of Coto de Caza; ten grandchildren and eight great-grandchildren.

Jean was born in Campbell, Nebraska December 8, 1929. In 1966 Jean and Jerry moved their family to California where she’s been a long time resident of Mission Viejo. Her enormous personality and love of Jesus Christ will be missed by everyone who was fortunate to know her.

A Celebration of Life Memorial will be held on December 9th at 1:00 PM at Saddleback Church, Lake Forest, CA. Reception immediately following at Hacienda Restaurant on Lake Mission Viejo.

In lieu of flowers, donations in memory of Mrs. Chudomelka may be made to Saddleback Church or Mission Hospital Foundation.