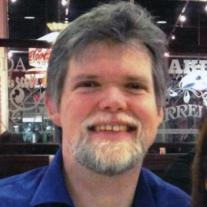 Jason M. Taylor, 41, of Irvine, CA, moved on to his heavenly home on Tuesday, October 7, 2014, after a three-and-a-half-year battle with metastatic renal cell carcinoma. He was born in Fullerton, CA, to Harvey and Lael Taylor. After being homeschooled from fourth-twelfth grade, Jason went on to attend California State University, Fullerton (CSUF). During the spring semester in 1995, he met Heather Whitney who would quickly become his best friend and ultimately his wife.

In 1999, Jason received a Bachelor of Arts degree in Communications with Minors in German and English. In 2005, he was conferred with a Master of Arts degree in English from CSUF. Jason was a Professor of English at CSUF, CSULB, and Santa Ana College.

On July 26, 2008, after a seven-year friendship and six-year courtship, Jason and Heather were married. In 2009 they welcomed two rabbits, Thumper and Castle, into their family.

Jason was an avid reader and writer of Science Fiction; author of two textbooks on grammar (Building Blocks: Skill Sets for Live-fire Writing, Editing, and Grammar and The Little Book of Don’ts); an instructor of both Kung Fu and women’s defense, and a founding member of Kron Martial Arts, the HEMA Alliance (Historical European Martial Arts), and Swordscholar. Jason was also a practicing Roman Catholic and member of the Knights of Columbus.

Jason is survived by his parents Harvey and Lael Taylor, his brother William Taylor, and his loving wife Heather Whitney.

His life will be celebrated at O’Connor’s Mortuary in Laguna Hills with a Rosary/Vigil on Friday, October 17th at 7 pm, and at St. John Neumann Catholic Church in Irvine with a Funeral Mass on Saturday, October 18th at 12:00 pm.

In lieu of flowers, donations may be made to the Knights of Columbus Council 7985, c/o St. John Neumann Catholic Church, 5101 Alton Parkway, Irvine, CA 92604.