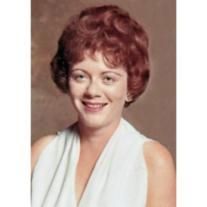 A Vigil will be held at O’Connor Mortuary in Laguna Hills on Monday, November 12, 2012 from 7-9 p.m. A funeral mass is scheduled for Tuesday, November 13, 2012 at Santiago de Compostela Catholic Church at 10 a.m.

She was born September 4, 1932 in Danvers, Massachusetts and was the sixth of nine children born to Edmond J. and Edna F. Mead.

Mrs. Hughes attended Wenham Center School and graduated from St. Cretienne Academy in Salem, MA. She also attended Manhattanville College of the Sacred Heart in New York City. Janice loved oratory and prepared many dramatic monologues; she was the winner of the Cardinal Cushing Oratorical Contest in her senior year at St. Cretienne Academy.

An avid tennis player, Mrs. Hughes enjoyed playing at the John Wayne Tennis Club in Newport Beach and the Lake Forest Beach and Tennis Club. She won several trophies as a singles and doubles player.

She was an active member of Santiago de Compostela Catholic Church and supported several charitable organizations.

Mrs. Hughes is survived by two sisters, Carol A. Mead of Manchester by the Sea, MA, and Faith C. Bertrand of Wenham, MA. She also leaves four grandchildren: Michael and Cathleen Hughes, son and daughter of Stephen Hughes and Betsy Lockhart; Julianna and Jasper Hughes, daughter and son of Larry and Alexandra Hughes.

She will be remembered for her graciousness, kindness, intelligence, and devotion to family. She loved to travel and spent many happy moments touring the southwestern United States with her husband and boys.

Condolences and flowers may be sent to O’Connor Mortuary in Laguna Hills.