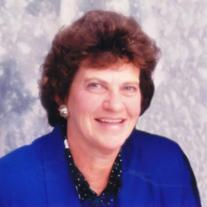 Janet Eleanore Thorp Beam passed away November 10, 2011, after a ten-month battle with cancer. Janet was born in 1938 to Keith and Evelyn Thorp, and raised in Iowa Falls, Iowa. She graduated from Iowa Falls High School in 1956 and received her Nursing Diploma from St. Barnabas School of Nursing in 1959. She began her nursing career in Yakima, Washington, then served in the United States Navy Nurse Corp from 1962-1964, achieving the rank of Lieutenant Junior Grade. After being honorably discharged, Janet worked at the St. Louis Park Hospital in Minnesota while caring for her aunt. In 1965, Janet began her VA Hospital career in Long Beach, CA. until retiring in 1996.

Janet and Jim were married October 3, 1970 in Iowa Falls, Iowa and resided in Cypress, California till moving to Irvine in 1977. Janet was very active in her church and attended every event involving her children.

There will be a memorial service at Good Shepherd Lutheran Church in Irvine, CA on Sunday, November 20 at 2:00pm, with reception to follow. There will also be a service this spring in Iowa Falls, Iowa, with burial in Union Cemetery. In lieu of flowers, please consider a donation in memory of Janet to Good Shepherd Lutheran Church. Please visit Janet’s website at www.caringbridge.org/visit/janetbeam for further information.