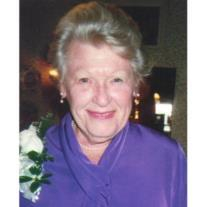 Jane Elaine Lyon Melford was born on October 1, 1920 in Vallejo CA , the first of 3 children to William and Jean Lyon. She grew up on a ranch with her brothers Bill and Bob in Dixon CA during the 1920’s & the Great Depression. It was not an easy life helping her Mother cook 3 meals a day for the family and many ranch hands; but she learned determination, hard work and how to eat healthy and how to make good pies since she had to make ½ dozen or so every day. She made the best apple pie ever! She learned to drive a Model T truck on the ranch prior to when driver’s licenses were required in California and she rode a horse to school.

She left the ranch at a young age and worked a lemonade stand; went to the University of California at Berkley for a few years then began to work in a new department at Sears & Roebuck called the Credit Department. She left college so she could support her younger brother Bill with his new real estate business known at Lyon Realty in Sacramento.

Jan met Sidney G. Melford during World War II while working on McClellan Air Force Base in the microfiche library. Sidney enlisted as a Dentist in the Army Air Corp. He proposed marriage to Jane when he learned he was leaving to go oversees to Japan. When Sid popped the question Jane’s response was to ask a question ” Are you planning to become a farmer?” Sid replied “What?!!! Of course NOT, I am a dentist” so she said yes. Her father was an engineer but decided prior to her birth to go into farming and she did not want that. His ship was delayed for 3 days so he unexpectedly wrapped on her apartment door and they left for San Francisco to get married on October 5th, 1945.

After Sid returned from the Far East they settled in Los Angeles. Dad returned to his Dental practice in the Taft building on Hollywood and Vine, they lived with his family in Hollywood for a short time – now Sid parents were orthodox Jews and his mother Pauline kept a kosher kitchen. I am sure that was a culture shock but Jane states that when her mother in law found out she was raised on a ranch she decided she was good and it helped that Mom could drive her to do the grocery shopping down in Fairfax district of Los Angeles.

They bought a house in Sherman Oaks. Dad’s practice eventually moved to Beverly Hills. Mom was never one to sit around, she helped Sid in his practice managing the books and the office, she got interested in silversmithing with a dear friend Jean Fox and made many beautiful things that you can see displayed in the back. She also got involved in the League of Women Voters and put on many fund raisers for charities. When the office of the League of Women Voters tried to get a Beverly Hills chapter going she was asked to lead the efforts, which were very successful.

Jane & Sid had difficulty conceiving so after being married 16 years they decided to plan a big trip to Europe. They sailed on the ship Liberte and traveled all over but one thing made them curious.. she was eating her way nonstop through Europe but stayed a size 4 – 2 breakfasts in Paris and then 2 bowls of ravioli in Venice. Hmmm. They were elated to find out after their return that she was 4 months pregnant!

Their son Robert Joseph arrived March 15th, 1962 – she had a fast and easy delivery so she was ready for #2 but with her age at 41 and Dad’s at 50 , the Obstetrician said “NO way – my heart cannot take the worry!”. Robert was born on the same day as Sid’s best friend Robert Gould.

Jane & Sid supported Robert’s interests including Scouting. Jane & Sandy Kerr Darby planned many an event for the cub scouts that enabled Robert and Andrew (Sandy’s son) and Marc Williamson to become best friend for the rest of their lives.

Jane & Sid bought the house in Mission Viejo in Casta Del Sol in 1983 and moved in permanently in1985. Again Jane could not sit down & retire so she got involved in the CDS greenbelt committee eventually leading that group. Then she was tapped to be on the Board of Directors, which she did for many years. She still remembered the CC&Rs by heart until the day she died. She got involved with being a liaison to the City of Mission Viejo where she learned about other ways to serve her community such as giving voice to prevent the elimination of the Orange County Transport Authority’s shuttle services used by seniors and others, the fight to prevent an airport at the El Toro Marine base, she was on the citizen advisory board of the Santa Margarita Water District and assisted with various political campaigns in the local area. If you wanted to know what was going in this town you could always ask her but that may mean a long phone call.

Robert and I met after his terrible boating accident in 1989 and despite many stories you may have heard from her about loving me right away, well – they were not true. She was not too keen on a gal hanging around her son while he was recovering from his accident but when she realized I was the real deal she came around. Robert & I were married on October 5th, 1991 – which was Jane and Sid’s 46th wedding anniversary.

Ryan the first grandson arrived in July 1996 and both Jane and Sid were there to greet him; unfortunately Sid died 5 weeks later of cancer. Andrew the second grandson came in August 1999. The grandsons love their Nene – Jane tried for the title of Nana but you know kids – they came up with Nene and it stuck. Mom helped us raise these great boys – teaching them to pick up their toys and clean up their room and help Mom & Dad. Many times I threatened or did sic Mom on them to get things done when they would not listen to me. Mom picked the boys up from school, helped with homework and even helped cleaned some of my house while she waited for me to return from work.

Jane loved her whole family and in addition some of her other passions included traveling. Sidney would take her and Robert on long vacations (5-6 weeks) every summer covering most of the western United States and beyond. Sid took Jane all over the world beginning their European trip then the were able to go to China in 1978 – the first tourist group allowed into China after it was opened up in 1972 -Sid took trips with the Dental society which provided services and training to dentists in those countries. They also did this type of travel in Africa. They took Robert to Istanbul, Israel, Greece and Yugoslavia when he was 10 years old. Later trips included Russia, and a trip with Robert and June to Ireland. Jane continued to travel even after Sid’s passing on tours and cruises with friends who loved to travel. Her last trip was this past March to Death Valley – where the whole tour group applauded her for traveling so well at the age of 93.

Other passions included jewelry making which she has done as long as I have known her – learning how to shape raw stones, bead necklaces and wrap wire but she loved lost wax and fabrication. Jane loved to garden.

Mom loved to continuously learn. She was part of book clubs in the 60’s and as mentioned learned how to do the silversmithing and jewelry making. Jane loved playing bridge so after Sid died she wanted to learn the new way to play so she signed up for classes at Lake Mission Viejo and met some gals there. They became fast friends especially since they all lost a spouse in the previous year or 2. That group changed members over the years & she was still looking for a group to play bridge with right before she left us. Recently for the past 8-10 years she has been taking emeritus classes with Saddleback Community College on current events taught by an ex-CIA member and economic classes – she knew about the bank closures in 2008 – 2009 before we all did, she even learned how to read the Wall Street Journal in her 80’s.

Jane is a real example to all of us on how to live a good life and how to grow old well. I want to share some tips from her life.

She ate healthy. – growing up on the ranch taught her what fruits and vegetable were in season and how to pick them, she ate a variety of foods all the time and cooked her meals right up until the last month of her life. I believe this contributed greatly to her good health and long life. She healed from other surgeries so fast that the physicians were always so surprised.

Jane was a joiner – she loved to learn new things and joined groups who were making a difference, this lead to many lasting friendships. Despite out living most of her friends she had in younger years – she still has many friends today because she was willing to do something new, meet new people and was a great lady to be with. Always ready to tell a good story, she was intelligent and up on current events.

Jane stayed active physically – with gardening and jewelry making;
Mentally – reading continuously, involved in community affairs, playing bridge & creating jewelry designs.
And lately Spiritually – she came to know Jesus later in life after the death of her son Robert who preceded her by 3 years. During Robert’s fight with cancer we were surrounded by the love of Christ with our church family at Mount of Olives – they were always there to help us whether it was delivering meals, bringing Robert to appointments, sitting with him so I could leave to do whatever with the boys or to give me some time and of course -to celebrate life – we had a lot of parties those last 2 years! She was so attracted to that love and also the desire to see Robert again, she gave her heart to Jesus and joined the church and has been coming regularly every since. She stated if she has known what being a Christian was really about and what being part of a church could mean – she would have done this long ago.

She loved her family and was always there when we needed her. We are all blessed to have known her.