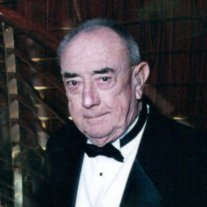 Jim grew up in Binghamton and Buffalo, New York and had many fond memories of the family summering in Jamestown, NY. His family moved to San Diego, California where he graduated from St. Augustine High School in 1944. He joined the U.S. Marine Corps proudly serving in the South Pacific for the remainder of World War II.

Following the war he settled in Los Angeles and began a 45 year career in the construction industry as a member of the United Association of Plumbers and Pipefitters. He married Betty (Bet) Jean Juden on July 2, 1949. In 1950, as a member of the Marine Reserves, he was called to active duty to serve in the Korean War. Leaving his wife and baby daughter behind, he bravely fought in the Inchon Invasion and the Battle of the Chosin Reservoir.

On his return from Korea, Jim continued his trade as a plumber in the Santa Monica, California Local 545. He served the union as Business Agent and Business Manager of the Local as well as president of the Southern California Pipe Trades District Council 16.

Nothing gave Jim as much joy as traveling with Bet in the string of motor homes they owned through the years. They explored much of the US & Canada delighting in time spent with family and friends. Jim was active in the Boy Scouts of America, a member of the Orange County Chosin Few Chapter, Elks Club, Knights of Columbus and a leader in the Society of St. Vincent De Paul at Santiago de Compostela Parish in Lake Forest. In retirement he became a skilled painter, woodworker and an occasionally successful golfer.

The family is very grateful to physicians, nurses and caregivers of Mission Internal Medicine Group, Mission Hospital, and Accent Home Health for their help and kindness during Jim’s illness.