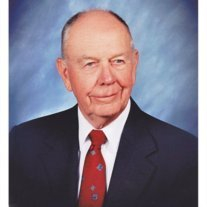 Jim attended school in El Reno and graduated from El Reno High School in 1943. He entered the U.S. Navy in February 1944 and was assigned to the Destroyer U.S.S. Hale and participated in the invasions of Guam, Saipan, the Philippines, Okinawa, and Japan. He was discharged in 1946 and returned to his position with the Rock Island Railroad. In January 1951, he enlisted in the U.S. Air Force and was assigned as a B-29 gunner. He was accepted into the Aviation Cadet program and graduated as a Jet fighter pilot and was assigned as an instructor. In 1957 he entered the avionics field and subsequently became a staff avionics officer. He was medically retired in 1964. He became a Computer programmer in 1965 and served the U.S. Navy in this capacity until he retired in 1986.

Jim served the Lord in many churches as usher, deacon and elder. He dearly loved his Lord and his family.

Jim is survived by his beloved wife of 57 years, Julia; two daughters, DiAnn Lucas of Needles, CA and Holly Lynn Harvey of Mission Viejo, CA; two sons-in-law, Jacki Lucas and Paul Harvey; and three grandchildren who were the apple of his eye, Tana Ray and James Dean Lucas and Ryan Cash Harvey.