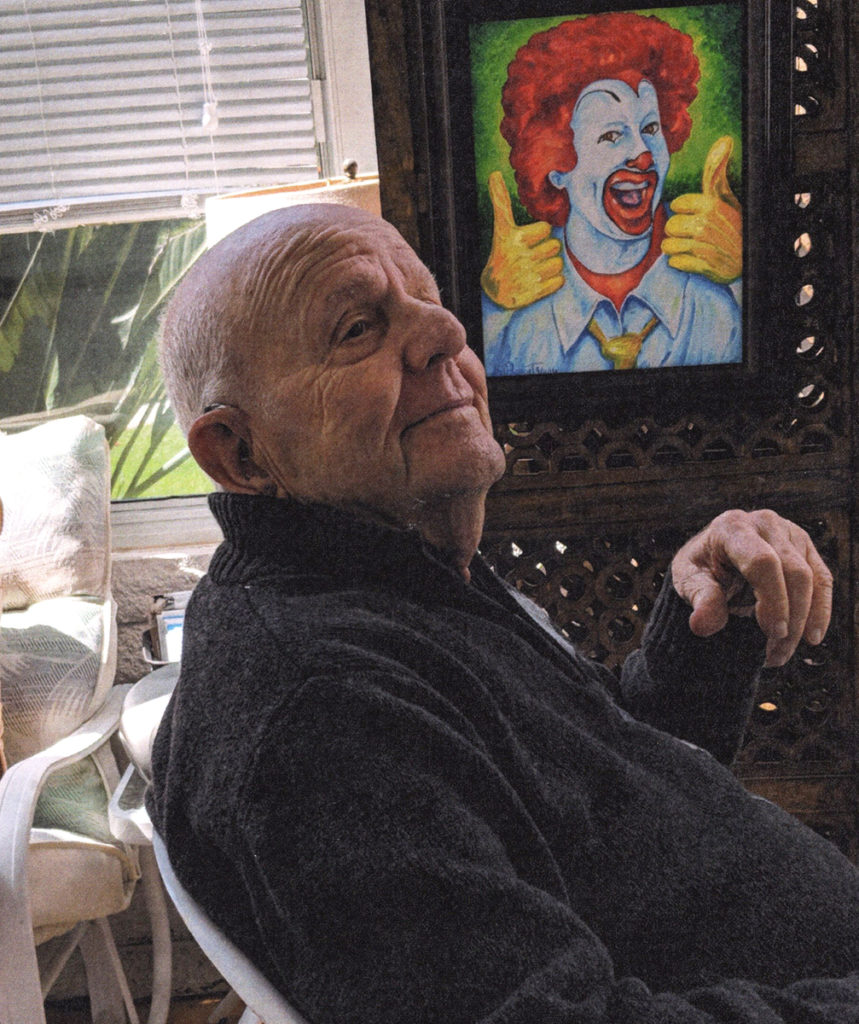 On 6 September 2021, my beloved father, James Maxwell (Jim) Rapport, died at the age of 96 in Aliso Viejo, California. He passed peacefully in his sleep, after a long, rewarding, and eventful life. He was born on 30 September 1924 in St. Louis, Missouri to Jewish parents John (‘Jack’) and Lydia, with a brother, Phil, and sisters Rose and Lydia (‘Babe’).  As a child, Dad showed exceptional talent as an artist. From 1938 to 1942, he attended the Merrimac Fine Arts School. In 1942, he trained in commercial art at Stix, Baer, and Fuller, a local department store. He was also on his high school track and archery teams.

Both out of a sense of patriotism and desire to see the world beyond south St. Louis, in 1943 Dad enlisted into the Army. He began service in the US Army Air Force, operating special purpose motor vehicles. While stationed in Alamogordo, New Mexico, he also painted ‘nose art’ on bombers. To accommodate both flight crews’ keen interest and the base commander’s sense of propriety he was known to paint women’s swimsuits in watercolor. As aircraft navigated overseas through clouds, the art would self-adjust. He requested transfer to frontline duty, however at first his commanding officer, admirer of fine art, belayed the request. This changed after an unfortunate accident involving the Colonel’s pet chihuahua. (Really. An accident. My dad adored dogs.)

Dad served with distinction as a combat infantryman from 1944 to 1945. As a scout, he led a squad through France, Belgium, and Germany, and never lost a man. He fought bravely in the Battle for France, Battle of the Bulge, Rhine Crossing, and ultimately, the capture of Berlin. During the postwar occupation, he worked on set designs for stage plays. He also served as an honor guard for General Dwight Eisenhower.

Surviving combat without serious injury, my dad had a mishap shortly after Germany’s surrender. He sustained a broken ankle when Nazi sympathizers jumped some friends and him outside a Paris nightclub. Ultimately, this served him well. While recovering, he attended a 9-week course in oil painting at the American University in Biarritz, France. There, he developed a deep appreciation for the works of Van Gogh and Monet. He separated from the Army in April 1946 with the rank of Corporal.

Back in St. Louis at a dance, a friend asked my dad to give a young lady a ride home. The young lady, a stunningly beautiful, engaging, clever red head, Eleanor (Ellie) Furman, became my dad’s wife in 1951. They moved into a small house with a precocious collie named Gentsie, and struggled financially as my dad free lanced in sales and commercial art. They developed a deepening love for each other, trout fishing, and golf. Dad’s career gained momentum; he became Creative Director for Obata Studios, an advertising and graphics firm. Among his larger projects were films for Sears and Roebuck, and NASA. On request, he also designed a remodel of Phyllis Diller’s kitchen. She assisted with a sledgehammer.

In 1957, my mom gave birth to my sister, Linda, and the new family moved into a larger home. In 1959, I came along. We were very happy, although Dad had an ongoing feud with our neurotic Siamese cat, Sweetie (Really. Terrifying animal.) In 1967, Dad accepted a position as Creative Director for Foster and Gallagher, a national mail order company, and we moved to Peoria, Illinois – with a much nicer cat, Calico. He prospered there, managing a staff of layout artists and photographers. However, Peoria was not without its challenges. He commuted to work over steep hills in a Chevrolet Corvair. To gain traction in the snow, he packed the trunk, front of car, with bowling balls.

Lured with the prospect of higher earning potential and warm weather, in 1971 my dad accepted a position as Creative Director for a division of Tandy Corporation, Fort Worth, Texas. We moved there but within one year, Tandy laid him off. Ultimately, this served him well. My mom and dad became full partners in Jim Rapport Advertising and Graphics. They rented an old house and converted it into a small business. My mom, incidentally with a photographic memory, researched prospective markets and clients, composed layout text, balanced the ledger, and ran the billing. My dad made sales calls, composed layouts, managed employees, and coordinated ad space with magazines and trade journals. Together, they developed an extensive client base. While growing the business, they also saw my sister and me through adolescence and young adulthood (no mean feat) and assisted my mom’s aging parents. At my mom’s request, they retired in 2004 and moved to California.

They moved to Laguna Woods Village, made friends, and played a lot of golf. Tragically, my mom succumbed to cancer in 2009. My dad endured the devastating loss, and kept himself busy with painting, golf, and communications with family and friends. He also found a companion, Delores Cia, who had recently lost her husband to illness. In 2016, Dad and I traveled to Washington, D.C. on an Honor Flight of World War II combat veterans, and thoroughly enjoyed the experience.

Recently, Dad endured further losses, both due to cancer. In 2020, Delores passed on. On New Year’s Day this year, my sister died. May they and my dad all find peace. My dad leaves a legacy of numerous admirers and friends, and many superb acrylic and watercolor paintings.

A Celebration of Life for my dad will be announced here soon.