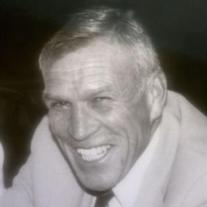 He was born on April 13, 1932 to Carl & Dora Wright in Centerville IA, the 6th of 9 kids. Jim enlisted in the Navy during the Korean War and spent the majority of his 4 years in the service on a destroyer in the Pacific. Afterwards he graduated from Buena Vista College in Storm Lake, IA where he was a star in football and track. Here he also met his homecoming princess Nancy whom he wed in 1959. In 1964 they moved to California, eventually settling in Laguna Niguel where they spent 45 years creating an amazing life with their two daughters, Amy & Carrie.

He worked with Chevron Oil in production for 22 yrs. including 5 yrs. on an oil platform off the coast of Huntington Beach. After retiring early from Chevron he started his own landscaping & maintenance business that he ran up until 2010. Jim was a hard worker who always provided for and took care of his Family. He was a genuinely nice person who never spoke ill of anyone; he also had an absolutely infectious smile. He wasn’t a big man in stature but he was one of the strongest men you could ever meet with a handshake that could bring a man to his knees.

He was preceded in death by his parents; brothers Bill & Don; sisters Wilma, Jenny, Anita & Edna, & infant daughter Julie. He will be deeply missed by his wife of 52 years Nancy, daughters Amy & Carrie, oldest brother Carl Jr. of CA, sister Dora Lee of IA, as well as many family & dear friends.

Jim was cremated and will be laid to rest next year in IA next to his daughter Julie. A memorial service will be held at O’Connor Mortuary in Laguna Hills at 1:00 on Sat. Oct. 1st with a reception following at the house.