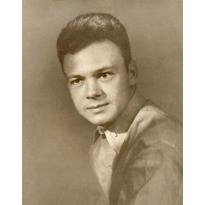 James F. McDaniel passed away on the morning of March 8, 2010. Family members feel blessed to have recently spent time together sharing with him life stories, memories and laughter, at his 90th year Birthday Celebration, and as he made the transition from this adventure here on earth to his next, we all knew he could feel our loving energy.

Jim was born to Tylitha Jane Patterson McDaniel and Hosa Ray McDaniel in Sweet Springs, MO on February 15, 1920. In college, he played the trumpet in three dance bands, wrote a gossip column for school paper and was on staff of the yearbook at Central Missouri State. Jim married his college sweetheart, Betty B. Jackson. Over fifty years of marriage was filled with fun, laughter and few tears. Jim and Betty’s many friends brought joy to their lives, while they raised their four children, living in various parts of the country.

Jim retired from the Navy as a Captain. His service career went from flight school to military intelligence, and onto Admiral Nimitz’s staff during the war in the Pacific, and from there, on to assignments in the Korean War. While in the Naval Reserve, as a civilian, he was in private research and development firms, and Aerospace. Eventually, Jim and Betty entered into the Southern California real estate market.

In retirement, they played golf, fished, traveled, and visited friends, across the country. Betty preceded him in death, in 1993.

For more than ten years Jim volunteered with HICAP, a non profit organization setup to counsel seniors. It was during this time that Jim met his new life partner, Ruth Nippe, and they would be together almost ten years. The two were great travel companions. Their Midwest roots nurtured a very close relationship, which gave them both much happiness.

The family is grateful to Silvergate Retirement Residence in Fallbrook, and to Silverado Senior Living in Escondido, for their compassion and dedication.

Jim had an infectious laugh, with a spontaneous sense of humor that all who knew him loved so much. He is survived by his daughter Martha Jane Kennedy Dale; his sons, Jack McDaniel Lauren, Roy McDaniel, Joe McDaniel Laurie; grandchildren, Kim Bergholz JC, Shawn Kennedy April, Mendy Kay McDaniel, Griffin and Fallon McDaniel, Rachel McDaniel; and great-grandchildren, Hannah and Brock Bergholz, Skyler and Jade Kennedy.

A viewing will be held between 3-5 PM, on Saturday March 20, at O’Connor Mortuary in Laguna Hills, CA. A military service with honors will be held Monday, March 22 at 12 noon at Riverside National Cemetery. In lieu of flowers, donations in Jim’s memory may be made to The Alzheimer’s Foundation, or to Silverado Hospice, 3750 Convoy Street, San Diego, CA 92111.