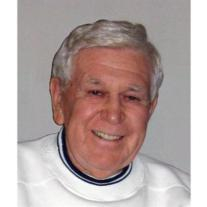 On November 28, 2012, James F. Grove, Jr. crossed the bar after a long illness. He was a native of Smithville, OH, the first of 8 children born to James F. and Lillie M. Grove. In 1942, Jim graduated from Smithville High and enlisted in the Navy shortly thereafter. He served as a Hospital Corpsman at Base 8 in Pearl Harbor, attending the wounded from the Pacific Theater. After WWII ended, Jim married his high-school sweetheart, Geneva “Gin” Emerson; he attended Ohio State until fatherhood intervened. Then he built basements and attended night school, studying electronics engineering. Eventually Jim found a job at Hughes Aircraft Co. and relocated to California, working in Culver City before moving to the Ground Systems facility in Fullerton. He retired after 33 years of service.

Jim was a longtime resident of Orange, where he raised his family. He had many talents and hobbies. He built a telescope, even grinding the lenses to perfection himself. He took sailing lessons, bought a sailboat, and joined U.S. Coast Guard Auxiliary Flotilla 2-7, where he manned a radio tower (he was a licensed HAM radio operator), participated in search & rescue missions, and boating safety programs. Other interests included genealogy and traveling. Every summer from 1990-1999, he’d hitch up his fifth-wheel RV and drive across the U.S., spending time with his many relatives before returning in the fall. Although Jim and Gin eventually divorced, they remained good friends until ill health separated them.

In addition to daughters Janet, Barbara, Susan, and grandson Daniel, Jim is survived by 5 sisters and 2 brothers, all of whom will miss him dearly. His family would like to express their heartfelt thanks to the staff of Pacific Breeze Home in Laguna Niguel CA, where Jim received exceptional care. Memorial service will be held at O’Connor Mortuary in Laguna Hills on Saturday, December 8 at 1:00 pm.