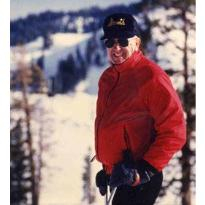 Jim Turner was born in Everett, Washington, June 28, 1932. He had an older brother, Ken and younger brother, Gary. Mother was Mary Marie and father was Kenneth Turner. Jim attended Everett Schools through High School except for a short period in Bremerton, Washington while his parents worked in the Bremerton shipyard during WWII. He took piano lessons for 12 years through high school, and then attended Everett Jr. College for one semester before joining the Air Force for four years.

He met his wife in EHS and they were married after Rhea graduated from EHS in 1951. During the four years in the Air Force, Jim was stationed at Lackland, Air Force Base in San Antonio, Texas; Cheyenne, Wyoming, and Manassas, Virginia with 11 months in Seoul, Korea. Jim and Rhea moved to Westminster, California with Cindy, Kim, and Jeff. Jim then attended Long Beach State College to receive a BA, and an MA in Education.

During this time he taught for the Westminster Elementary School District. He was looking for an opportunity to teach overseas so the family could experience a different culture and language. He and a friend followed up on an ad at the college looking for teachers to teach English as a second language in Micronesia. The two families were then accepted to teach in the Palau Islands in the Western Carolines and moved to the islands in September of 1964. The Turner family was assigned to the beautiful village of Ollei meaning friend on the tip of Babelthaup, an island about the size of Catalina. After two meaningful and unforgettable years there, the family returned to Westminster. Jim became an administrator in the Westminster School District and began work on his Doctorate in Education at USC. At this time he was very active in the Westminster YMCA.

In 1974, Rhea and Jim sold their home and bought a 39′ Cross trimaran sailboat and moved aboard with Kim and Jeff, living in Dana Point for four years. When Kim and Jeff moved out, Jim was hired as Superintendent of Schools in Jamul Elementary School District in Jamul east of San Diego and moved the boat to San Diego where they lived for 8 years. Jim left Jamul to become Superintendent at the Santa Paul School District until retirement in 1989.

After retirement Jim worked summers at Two Harbors on Catalina Island while preparing to go cruising to Mexico, the South Pacific and ultimately ending the cruise for a several month stay back in the Palau Islands before heading back to Hawaii and home to California. After arriving back in California a previous health problem returned requiring surgeries and various other treatments to maintain his health and a quality of life. He was able to keep going for several years until it became apparent a move off the boat was going to be necessary.

Jim and Rhea moved to Leisure World in Seal Beach in 2005 after living aboard the THESIS for 30 years. Jim passed away at home on December 23, 2006 with his family around him. He always put his family first and had a happy fulfilling life of love and adventure.