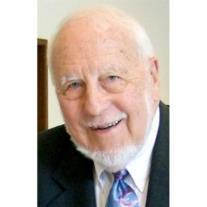 James Edward LeMay of Irvine, California, a lifelong Catholic, passed away on March 3, 2015, at age 89.

He was born in St. Paul, Minnesota, the youngest of five children born to Eugene Noel and Ruberta “Ruby” LeMay. He served as an altar boy at St. Matthew’s grade school and attended all-boys high school, Cretin, where he was involved in the camera club, school newspaper, yearbook, and the ROTC precision marching and rifle drill platoon. He also worked as a drugstore clerk and soda jerk, earning 10 cents an hour, and spent many hours at the St. Paul Catholic Youth Center.

World War II began when Jim was in high school and his goal was to attend a military academy. He was twice named first alternate to West Point. He attended St. Thomas College in the mid-1940s, where he took photos for the college public relations office and student newspaper while helping to organize a drama club. When his medical history disqualified him for West Point, he enlisted in the Army, where he shot photographs and ran the film library at Fort Dix, New Jersey. The base’s location near New York City allowed opportunities to see many Broadway shows.

After his service in the Army, Jim returned to the St. Paul Catholic Youth Center, where he met his future wife, Mary Dicks. He was hired to develop a program for young people at Nativity Parish and re-enrolled at St. Thomas College. He proposed to Mary on Christmas Eve 1949 and earned his bachelor’s degree six months later. Mary gave up a promising career at Pitney Bowes, where she was a regional manager at age 21, to marry Jim. They were wed Aug. 5, 1950, in a ceremony officiated by Jim’s brother, Father Henry LeMay.

The newlyweds moved to Bloomington, Indiana, where Jim enrolled in graduate school to study the then-new field of audiovisual materials. He earned his master’s degree in 1952, the same year his first child was born.

Jim traveled extensively for his jobs, primarily Coronet Educational Films. He also served as Alderman in Park Ridge, Illinois, where the family lived for 23 years, and performed in Chez Paris, an annual talent show fundraiser at Mary, Seat of Wisdom Catholic church.

After their children were grown, the LeMays moved to San Diego and then to Irvine. Jim retired from Coastline Community College in 1996 as Associate Dean of the telecourse division. One of the many productions he led during his tenure at Coastline won an Emmy Award in in the educational program category.

Jim and Mary enjoyed a surprise 60th wedding anniversary party thrown by their children when they traveled to Chicago in 2010 for a grandson’s wedding. Many friends and family members from the Midwest attended the event, which included a slide show of photo memories and the family’s special recipe Mahogany Cake.

Jim and Mary moved to Regents Point retirement community in 2009. After a few years, Mary moved to the memory care unit where Jim visited her daily until she passed away in Feb. 2013.

In addition to his four sons and three daughters, Jim had seven grandchildren and two great-grandchildren. He was immensely proud of all of them. Although his family is spread across the country, they participate in weekly online chats and gather every few years for a reunion.

Jim was much loved and will be missed, but the family is glad that he’s now been reunited with his beloved wife of 62 years.

In lieu of flowers, donations can be made to the Mary R. and James E. LeMay Youth Ministry Endowment Fund at St. Elizabeth Ann Seton Church in Irvine (http://orangecatholicfoundation.org/lemay).