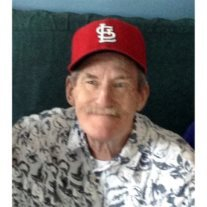 James Edward Branch, 64 years old, died on Wednesday, February 19, 2014 surrounded by his loving family. His strength and courage was evident as he moved through his last days, and we all were comforted that his transition from this place of physical and emotional pain and suffering was peaceful.

Jim was born to Gordon and Gladys Branch on December 8, 1949 at St. Mary’s Hospital in Long Beach California, where he grew up and attended schools in Lakewood. Jim stayed close to his childhood home and never lived too far away. In 2004 he moved to Medford, Oregon, but returned to California in June of 2013 to be closer to his sister and family as he struggled with a myriad of medical issues.

His handsome smile and good looks were always on display and boy, did he have a way with words, especially for the ladies! Whether it be the clerk in a store or the server at the restaurant, he would have some wonderful comment. And they weren’t just for the cute ones. He could put a smile on a grandmother just by saying, “You’re beautiful!” You couldn’t walk away from him without a smile on your face.

At age 18 he enlisted in the United States Marine Corps, where he served in Vietnam. His experience there left a Veteran who suffered deeply when he returned. His life would never be the same and his emotional wounds were deep. When he returned from the war, his dad, who owned Branch Tank Lines, taught him everything he needed to know about driving and maintaining 18 wheelers. He idolized his dad and in later years would constantly reflect on times gone by when life was sweet, and he sat in the cab of that giant machine, truckin’ down the highway.

He loved music, and would keep us all in stitches with his imitations of Elvis, Waylon Jennings and others. He had two famous lines that he used throughout his life, “just doin’ my thang” and “heels a clickin’. He loved life and he loved his kids, grandkids and his nieces and nephew. He loved Peterbilts, chili dogs with onions and a cold Budweiser. Roy Beaman and Joe Meads were two of his many elementary and high school friends he stayed close with throughout the years.

Jim is survived by his 3 children, Steven Edward of Lake Tahoe, Jeffrey Allan of Huntington Beach and Jayme Nicole of Long Beach. Also 3 grandchildren, Eliza, Van and Marley and his sister, Patricia Kolstad of Laguna Woods. Nieces, Kari Leslie, Kori Kolstad and Kristen Miranda and nephew Bruce Kolstad, as well as 9 great nieces and nephews. His father and mother preceded him in death.

Funeral Services will be held on Thursday, February 27 at 10:00 am at the Mortuary.

Graveside Services will follow the funeral service at Riverside National Cemetery at 1:00 pm.