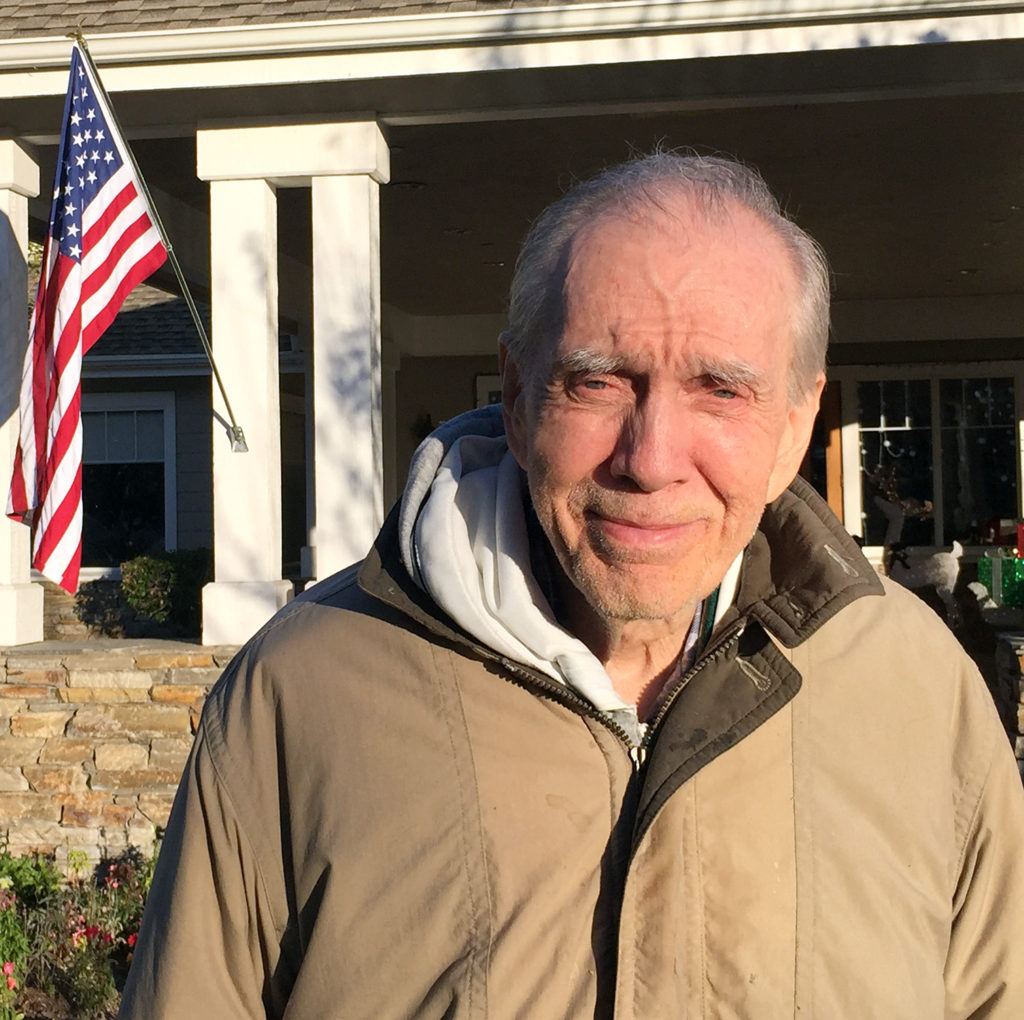 James “Jim” Bennett McNally, age 95, passed away peacefully on his final mission at Kaiser Orange County Medical Center in Irvine, Ca. He was born March 8th, 1926 in Johnstown Pennsylvania and grew up there with his parents and one sister. He graduated Westmont Upper Yoder High School in 1944, departing that same night for US Army Air Corps boot camp. He served in WWII as Aircrew on a B-17G as a Ball Turret Gunner. He manned twin .50cal’s and was assigned to 8th Army Air Corps, 398th Bombardment Group (Heavy), 603rd Squadron at Nuthampstead England – Station 131. He flew hazardous regular missions, but also quietly participated in specially equipped B-17s, called Pathfinder Force or [PFFs] at night. These were dangerous long range missions alone, with no fighter escort. After the war he graduated Rochester Institute of Technology in Upstate New York with a B.S. in Electrical Engineering and had earned a Pilots license to commute in his Piper J3B SuperCub from home in Johnstown Pa to Rochester NY. He worked for Bethlehem Steel, Pennsylvania Rail Road and Niagara Falls power station. After college he moved to Boston Massachusetts working for Raytheon and BOMAC on missile systems while he took night courses at MIT. Eventually joined Grumman Aerospace in Bethpage Long Island where he employed his honed engineering skills on the Lunar Excursion Module (LEM) supporting moon shot Project Apollo. Later he would effort on US NAVY’s F-14 Tomcat and eventually relocate his family out west to Arizona in Oct 1974. The Grand Canyon state was home to his flexible aerial gunnery training range and vivid memories of the US Southwest. In late 70’s he’d move again to Southern California onto TRW’s Space Systems Division Tracking and Data Relay Satellite System (TDRSS) in Redondo Beach.

While working as a young man in Boston Mass he met Mary Teresa O’Connell at an Irish American club dance. Noteworthy, as a little boy he reluctantly took dance lessons his mother insisted on in Johnstown by a yet unknown 18 yr old instructor named Gene Kelly, who would later win an Oscar. Jim and Mary married on Thanksgiving Day in Arlington Mass Nov 26, 1959.  They went on to have 5 children and were married 57 years. He and Mary loved taking Sunday sightseeing drives after morning mass at OLPH in Lindenhurst L.I. visiting state parks, seashores and historical sites. Places like West Point on the Hudson River, Sagamore Hill – home of President Teddy Roosevelt or Jones beach and Venetian shores. As a child, my favorite 4 spontaneous words were hearing my father say with a grin, “lets blaze a trail”. Exploring the eastern seaboard with his young family or taking summer vacations to Johnstown Pa with his folks were some of the happiest days of our lives. It was always an honor to be his “right seater” navigator in a ’62 VW Bus as he’d toss over a map with encouragement saying “help me out with the road ahead and just do the best you can”. With all options open the open road was ours between Washington DC and Boston, but on Sundays we usually stayed between NYC and Montauk Point lighthouse.

He is preceded in death by his wife Mary Teresa O’Connell McNally, parents James Joseph McNally and Ethel Vivian (Bennett) McNally and his dearly beloved sister, Mary Jane Svitchan (McNally). He is survived by his 5 children, James (Jim) O’Connell McNally, Cathleen (Cathy) Bennett McNally, Stephen (Steve) Patrick McNally, Gael Christine McNally and Brian Andrew McNally. He has 4 Grandchildren, Nick, Kim, Mike, Brandon and 6 Great Grandchildren. He is survived by his cousin Eugene Shaffer of Prescott, Arizona and 2 Nephews Greg and Doug Svitchan. His virtues were built on a pillar of courage and inspired many. From his battle tested willingness and eagerness wearing his country’s uniform in defense of freedom his resolve has always remained undaunted and only exceeded by his love of family.

Immediately following the interment at Riverside National Cemetery, there will be a reception at: