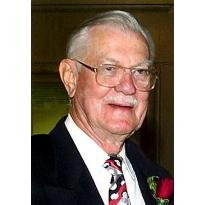 James ‘Jim’ Anthony Holmes, of Mission Viejo, CA died on Saturday, December 4, 2010, at the age of 86, after suffering a stroke. Jim was born in Chamberlain, South Dakota on September 11, 1924 to Harry and Gertrude Holmes. Jim and his siblings, Robert, Carol, and Paul, were raised in Wahpeton, North Dakota. Jim graduated from Wahpeton High School in 1941. He enlisted in the Army in 1943, was wounded during combat in April 1944, and was awarded a Purple Heart and Bronze Star for bravery.

Jim married Elayne Hamerlik in 1947, and they had two children, Roxanne and James. Jim married Viola Lohman in 1957, and the couple was married for 43 years.

An avid golfer, bowler, and USC football fan, Jim was also an active member of the Mission Viejo and Casta del Sol communities.

A viewing/rosary for James A. Holmes will be held on Thursday, December 9, 2010 from 7-9 PM at St. Kilian Catholic Church in Mission Viejo. Funeral services will be held at St. Kilian’s on Friday, December 10, 2010 at 10:30 AM, followed by a burial ceremony at Ascension Cemetery in Lake Forest and a reception at Norman P. Murray Senior Center in Mission Viejo at 1:30 PM.

In lieu of flowers, the family requests that donations be made in memory of Mr. Holmes to the Mission Viejo Friends of the Library.