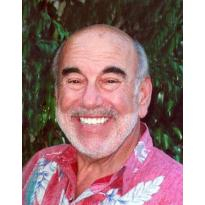 Just follow the laughter. Whether it was Disneyland, drag racing, classic cars, Maui, or spending time with friends and family, Jack Gottfried loved to laugh. Always on the go, he spent his days racing from event to event with a story, a joke, and a ready smile for any occasion. ‘Back up the bus,’ he’d say meaning he wasn’t finished yet with whatever was happening, and then he continued talking full speed ahead.

Retired from owning his construction company, Raja Engineering, previously he worked in the grading business with his uncle, worked for North American as a visual optics adjustor, and started out early working in a bicycle shop, but what he was best at was making friends.

Another of Gottfried’s favorite sayings was, ‘ I’m here for you.’ You could rely on him for anything. Although Gottfried was a fierce drag racer, he was willing to help a competitor, like the time he lost in the drag quarterfinals and was packing to head home. Another driver had a blown tire and had to quit. Gottfried pulled his own front tire and rim off and loaned it to the other racer. It was a perfect fit and the other driver kept racing. ‘By the time we switched tires back and loaded everything up, it was 3:30 am,’ said his long time friend Hank Oliver, ‘but as Jack always said, ‘Drag racing is about people you meet with a common interest who become your friends.”

Gottfried’s generosity showed itself again in his sponsorship of the San Juan Creek Park Tot Lot. Before Gottfried’s beloved dog Honey died, he and Honey could be seen cruising around town and playing fetch in his neighborhood park. Once Honey passed on, Gottfried donated money to the city of San Juan Capistrano to pay for the addition of playground equipment for a kids’ ‘tot lot’ and a dog walk for dogs. He wanted it to be an anonymous donation, but due to circumstances that wasn’t possible. Today in San Juan Creek Park there is a brass plaque commemorating Honey and Gottfried’s generous gift.

Gottfried didn’t like to wait for things to happen. He got his nickname, Action Jack, not because he was such a great drag racer, although he was that, but because he loved ‘to be in the middle, creating both funny and serious situations,’ said Oliver. That’s exactly how he spent his last days surrounded by scores of friends, cracking jokes, and sharing laughs.

While at Mission Hospital his room seldom had less than 10-12 friends and often it was standing room only. ‘We even had to rotate people out so that others could come in to visit Jack,’ Renée McDowell, his fiancée, said.

Jacob Herbert Gottfried passed away July 7, 2010. He was born in Yonkers, NY in 1944 and moved to Norwalk, CA in 1952. He later attended and graduated from Excelsior High School. He was a long time resident of San Juan Capistrano and a parishioner at San Juan Mission. Gottfried’s mother, Carol, was one of the first women to sell cars in the LA area, his father, Irving, was a dairyman for Knudsen Dairies. From his parents, he learned to get up early and get going.

One of the places he liked to go was Disneyland. Every year he bought season passes and he and Renée would often go there weekly even if it were just for dinner. One of his most prized possessions was his Mickey Mouse watch. A story he loved to tell over and over was about the first time he took Renée’s grandson Jakey to Disneyland and the joy he got watching Jakey’s face. ‘Jack was like a kid himself when it came to the rides. He sure loved Disneyland,’ his friend Dave Schaub said.

If it wasn’t race season, Gottfried could be seen just about any weekend driving one of his classic cars. He made several cross-country trips in his 1932 Ford Roadster and almost never missed a hot rod car show or swap meet. Locally he was instrumental in forming the Saddleback Knights car club.

Maui was another of his loves. He vacationed there with Renée every chance he got, and never missed going there the first two weeks of May to celebrate both their birthdays. Hawaiian shirts, shorts and flip-flops ruled the days and nights, and his laughter bounded around the island.

His friends are full of stories and ‘Jackisms.’ ‘Back up the bus,’ when he wasn’t finished with something; ‘I’m not feeling the love,’ when the teasing got out of control; ‘Okay, what’s happening,’ just about any time and anyplace when he was ready to get moving again.

Back up the Bus, Jack. You are going to be missed.

In addition to his fiancée, Renee Mc Dowell, Gottfried is survived by his brother, John Gottfried; his sisters Yvonne Gottfried and Olga Smith; his loving cousins, nieces and nephews; and a multitude of friends.