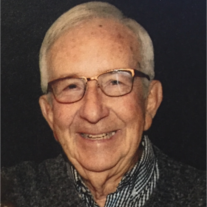 Jack grew up in El Monte, CA and graduated from El Monte High School. He served in the Korean War as a member of the US Air Force. He had a distinguished and enjoyable career in the Title Insurance Industry where he worked for over 50 years. Jack enjoyed church, sporting events, golfing, movies and traveling. Most of all he enjoyed spending time with his children and grandchildren.

Jack was preceded in death by his son Jeffrey Wayne Enda. Jack is survived by his sisters Barbara and Phyllis, daughters Stacey and Jeanette, sons Scott and David, and his 8 grand-children. Jack built his life around his family, friends and his faith. His unconditional love, strength and integrity will be greatly missed.

There will be a memorial service celebrating Jack’s life at 11am on Friday, February 10th, at Mariner’s Church Chapel located at: 5001 Newport Coast Drive in Irvine, CA.