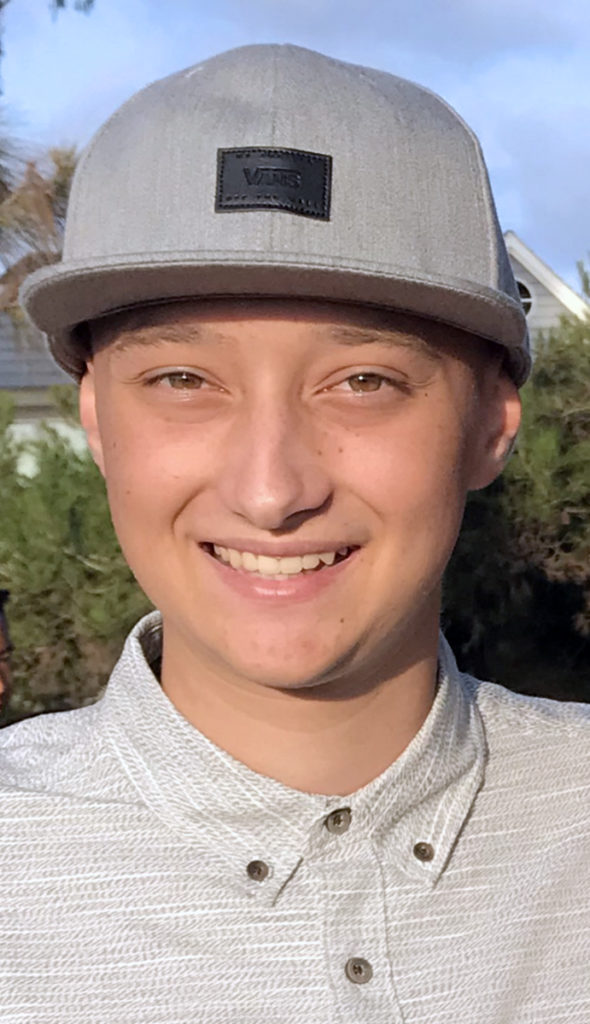 On April 11, 2020, beloved son and brother Jack Charles Hirsh passed away at the young age of 18 after a long and courageous battle against bone cancer.

Jack was born in Newport Beach, CA on December 7, 2001 and lived in San Clemente, CA his entire life.

Jack was quiet, smart, funny, witty, kind, compassionate, generous, and a loyal friend.His first and best friend was his brother William and that friendship continued throughout his life, with both boys often asking immediately upon entering the house where the other one was. Because Jack’s heart was always open to new friends, he took on another best buddy when he met Daniel Cangas Farrell, seven years his junior and in need of a friend. The two boys remained close, spending time together nearly every week.

Jack was a man of few words.  When he spoke, it was with quick wit and was typically funny.  He loved being the one cracking jokes and making his friends laugh, but never sought to be the center of attention. Hearing Jack speak was often like finding gold.  He spoke and acted with honesty.  He spoke out of love.

Jack looked out for the little guy, particularly those who could use his help.  Jack quickly formed bonds with the younger siblings of our friends, taking them under his wing and was always willing to make them laugh and feel loved. As a symbol of his ongoing generosity, Jack used his Make-A-Wish to benefit those kids at the Children’s Hospital LA who he considered less fortunate than himself by donating it to the CHLA Child Life Program.

Jack respected others and was always willing to be a friend to anyone that wanted to be his friend.Jack was fiercely loyal to family and friends and had a gift for bringing people together. This paid dividends. Jack made connections with many incredible people and his family is so grateful for their support over the years, particularly during the last few very difficult years. Along with his immediate family, Jack’s friends were his lifeline.

Jack loved being active, particularly when it involved being part of a team.  Jack had many great adventures with his family.  The Cinque Terra hike in the Italian Riviera, halibut fishing in Alaska, snorkeling in Kauai, and Harry Potter World were among his favorites.  He was at his happiest when working and competing with teammates.  His face was pure joy when celebrating with teammates after working together to break up a pass play or defend a goal.

Jack was a football fanatic.  He loved to play it, watch it, read about it, and, surprising for Jack, talk about it.   A perfect Sunday for Jack included playing catch in the morning and then watching two TV’s–one with the Chargers game and one with NFL red zone.

But during the two and half years of a brutal fight against cancer that no kid should have to endure, Jack was most of all our hero. Despite everything he was going through he was courageous and continued to think of others instead of himself.  He was always quick to tell us how much he appreciated us and he rarely complained.  Jack only lived a short time, but he has left an impression on many of us that will shape the way we live and teach others how to live.  We loved him so much and will never get over the pain of having him leave us after only 18 years.

Jack is preceded in death by his grandmother Jean and great aunt Mary.  Jack is survived by his parents Dwight and Valerie, brother William, grandparents Dwight, Lucy, and Al, uncle Greg, uncle Tom, aunt Elizabeth, his cousins Madeline and Andrew, many extended family members, and his loyal dogs Charger and Otis.

The family will celebrate his life with friends and family once it is safe to do so.

To honor Jack, the Hirsh and McSwain families have established the Jack Hirsh Endowed Fund for the Child Life Program.  To read more about Jack’s interest in the Child Life program or to donate, please visit: http://connect.chla.org/goto/jackhirshendowment.