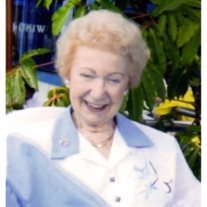 Isobel “Sandy” Dunham, born in Paisley, Scotland August 6, 1920. Came to the United States with her mom and dad when she was about 12 and settled in New Jersey. Sandy had lots of friends growing up which she called “The Gang”. One of “The Gang” was Larry Brooks whom she fell in love with and married. Sandy and Larry had two daughters, Janet and Cheryl, who are 5 years apart.

Larry passed away young and mom raised Cheryl by herself. Janet was already married. Sandy worked for several companies as an executive secretary ending her career working with Westinghouse, Aerospace Division in Red Bank, N.J. Sandy married again to a longtime friend, Lester Dunham, who was part of “The Gang”. Lester had two daughters, Peggy and Sue, who were the same age as Janet and Cheryl who all went to school together. Perfect Match!!

Sandy retired from Westinghouse and moved with Lester to Florida to have fun in the sun. Sandy volunteered at Saint Joseph’s Hospital in Tampa, Florida for many hears, won an award for the most hours served, and I think she still holds the record. She also volunteered every Saturday or Sunday afternoon at the Tampa Bay Performing Arts Center, where she saw every play and special performance several times over where she could have stepped in as an extra. She had the same door to the theater for so many years she got to know the season ticket holders who held the same seats. Her smile and greetings were a welcome to many theater goers.

Sandy moved from Tampa, Florida to California to be near her two daughters in 2008. She resided with 6 wonderful ladies at Royal Inns. She felt like one of the “The Golden Girls”, which was one of her favorite shows.