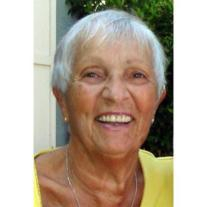 Isabelle was born in Hughson, California on July 24, 1925 to Benta and John Balsa and was the second youngest of seven children. She grew up in Modesto, California and graduated from Modesto High School in 1944 where she lettered in softball.

Isabelle began her career with the City of Inglewood in 1960 as a part time Recreation Leader in the Recreation, Parks and Community Services Department and became the first Pre-School teacher at Rogers Park in 1962 and continued to teach at this site until her retirement in 2001. She also served as Sr. Recreation Leader, a Recreation Specialist, and coordinator of other various programs and activities for the City of Inglewood. Upon her retirement in 2001, Isabelle relocated to San Juan Capistrano.

Isabelle was a lover of arts and crafts and spent many hours sewing and doing hand embroidery and cross-stitching. She enjoyed traveling, camping, sun bathing, and being in the outdoors. Isabelle was a lifetime sports enthusiast and enjoyed watching any and all football games with her son, Butch, until his passing in 2008. Isabelle was passionate about all things Disney and was a regular visitor to Disneyland since 1956; this passion was shared with many members of her family.

Isabelle will be remembered as a woman full of life and love, and who was completely devoted to her family, especially her Great Granddaughters. Her absence will be felt by all who knew her and she will be greatly missed.

A private celebration of life will be held in her honor.

She is survived by her two grandchildren Jenifer Rhoades and her husband Keith and Matthew Hall and his wife Lisa; her two great-grandchildren, Hannah and Emma Rhoades; her two brothers, George Balsa and Tony Balsa; her nieces and nephews; and the rest of her family and friends.