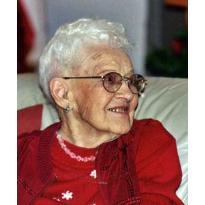 Irene was born on April 9, 1908, in Tacoma, WA, to Samuel and Della Elder. She had one brother, Delmar Elder. She married Walter Smith in 1923. Walter and Irene had two daughters, Rhea and Joan. Irene loved being a wife and mom, sewing for her daughters and tending her garden in Everett, WA. She also worked in a portrait studio in Everett. It was there that she learned to color black and white portraits. She used this skill even into the 1970’s for her grandchildren’s graduation pictures.

Irene and Walter moved to California in the mid 1950’s to be near Rhea and her family. Grandma enjoyed few things more than being with her daughters and their families. Almost equal to that was a good trip to a nursery and buying new plants for her beautiful yard in Long Beach. A close third was shopping especially for dancing shoes, and getting her hair and nails done.

Walter and Irene enjoyed trips to New Orleans and Hawaii. They liked to go dancing with friends and entertaining their daughters, sons-in-law, grandkids, and great-grandkids in their colorful backyard. Irene worked at a portrait studio in Long Beach, CA.

In 1993, Walter and Irene moved to Vancouver, WA, to be near two granddaughters and their families. It was there that both Irene and Walter trusted Jesus as their Savior. When Walt passed away in 2001, they had been married 73 years. She moved to Seal Beach, CA, in 2005 to live with her daughter, Rhea, and son-in-law, Jim.

Irene had a long and happy life during which she never lost her sense of humor or her sense of adventure. She went out on a wakeboard boat ride to see her great-grandchildren wakeboard, and went sailing on the trimaran sailboat her grandson built. She was a delight to all she met. Everyone commented on how nice she looked and her sweet nature. Irene was dear to many friends of her daughters and grandchildren. She will be deeply missed by her family and many friends. Irene is survived by her daughters Rhea and Joan, and Rhea’s husband, Jim Turner. Irene had 6 grandchildren and 12 great-grandchildren.

She passed away on August 15, 2006, in Los Alamitos, CA.
Her goal on her last day on earth was to see her husband in heaven. Mission accomplished.