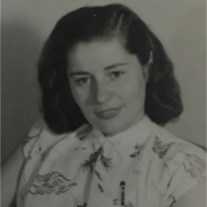 She and her brother Siegfried grew up in Berlin and lived a storybook childhood, until the war began in 1939. Her teenage years were interrupted by constant air raids and other plights of war until her family was finally bombed out in 1943 and left homeless. Undaunted, they persevered and Ilse finished her education with a degree in Home Economics.
At the age of 18, while doing her internship in northern Germany, she had to flee the Russian invasion and found her way back to her parents, who had moved to Bavaria. Living as war refugees during that time, they scavenged everything they could, and ever resourceful, Ilse even crocheted a beautiful white dress from the thread of discarded sugar sacks.
Always enamored by American films, the music of the Glenn Miller Band and her favorite actress Shirley Temple, Ilse was drawn to leave her war torn homeland and explore America. After finding a sponsor and a job in United States, she donned her crocheted white dress and at the age of 24, hopped a ship to America.
Her adventures continued for several years in upstate New York, until she had the opportunity to come to California. Working as a dental assistant, she met her future husband, Samuel Inlow, in the dental office and they married in 1954.
The consummate homemaker and an incredible cook, Ilse cared for her family for the rest of her life. She loved gardening, needlework and was an avid reader. Among her favorite charities were the Wounded Warriors and Paralyzed Veterans. Even though she was often quite homesick for her beloved Germany, she was ever the loyal wife and mother and grandmother.
At the age of 91 Ilse passed away peacefully at home on October 4, 2017, surrounded by her family.
Ilse was predeceased by Samuel, her loving husband of 53 years. She is survived by her brother, Siegfried Kramer, her three children, Mark Inlow, Nina Prettyman and Stephan Inlow and their spouses Annie, Gary & Joanie; seven grandchildren, Michael MacKay, Kari Ballard, Jeffrey Inlow, Alana Inlow, Sarah Inlow, Reina Inlow, and David Inlow and four great grandchildren, Haley MacKay, Trevor MacKay, Ruby Ballard and Noah Inlow.
In the words of her granddaughter Kari: “She was beautiful, unbelievably courageous, gentle, graceful, had a vivid, colorful memory, was an incredible storyteller (with an incredible life story) and has finally been called to behold the face of our Father in Heaven. We love you, Oma! You live on truly, and are always in our hearts. May you rest in the eternal joy & peace of Christ. “