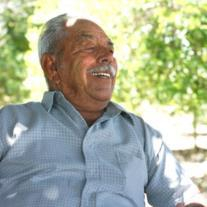 Ignacio A. Lujano was born in Holbrook Arizona to Jesus Lujano Savala and Francisca Aguilera Valencia, on February 1st, 1924. The eldest of 6 children, to parents who had immigrated from Michoacan, Mexico in search of a better life for their family.

They found their way to Inglewood, California where Ignacio went to elementary school and demonstrated his artistic abilities, and even won a drawing contest. In 1931, Ignacio and his family were forced by the U.S. government to return to Mexico which was a dark period in U.S. and California history known as the “Mexican Repatriation.”

Ignacio would spend the next 27 years working hard even as a young child in agriculture, building, and construction and architecture, while enduring hard times and family tragedies in the states of Michocan, Jalisco, and Morelos. Settling in Morellos he was successful in his work and met his love and married Marciana Dionesia Ramales and began to build his little “ranchito” and his family. Nine children born to Ignacio and Marciana, were Gilberto, Francisco, Aurelio, Jose Francisco, Maria, Margarita, Rogelio, Jose Manuel and Alejandro.

In the Spring of 1958 Ignacio and his brother Lucas found their way to San Juan Capistrano and Ignacio quickly fell in love with the “pueblito” and recalls the day he came into town as a defining moment in his life. “I saw all the beautiful hills, smelled the sweet orange blossoms, saw the church in the center of town and all the nice, honest people and i knew then I found my home.”

Ignacio quickly found work as a farm and ranch hand, working for families such as the Kinoshitas, the Rosenbaums, the Giddings, Boheims, Fulton Shaw, the Bathgates, Williams, the Swanners and more. All the while earning integrity and respect as a good, honest, hard working, God fearing man who could be trusted and depended on for just about anything.

Tragedy struck again in September 1966 with the sudden death of his only brother Lucas and then his beloved wife in the Spring of 1973, losing her to cancer. For the next 16 years he would persevere, like a warrior, single handedly raising nine children from ages 19 down to 2 and a half years old. Still working hard never abandoning his work, his children, nor his responsibilities. He always stayed true and faithful to God and his family.

In 1988, he found love again and began to build his life with Maria Dolores Calderon. Now at 65 years old, he had his son Jesus and Ignacio jr. at 67. In 2008 Ignacio suffered a stroke and recovered and also had to leave San Juan Capistrano and had to relocate to Lake Elsinore that year. He continued a simple, quiet, honest life there until passing on November 13th 2015. He will be reunited with his son Francisco Sr. who preceded him in 2002.

Ignacio will always be remembered as “Don Nacho,” “Don Nachito,” or just as Nacho. He was very well known for cruising through town in his beat up 62′ Chevy pickup.

Beaman Howell recalls a story about Nacho, “I will never forget the time my motorcycle quit running and I was pushing it home to the San Juan electric substation, Ignacio stopped with his truck to help and i said I am ‘OK,’ but Ignacio insisted on putting my motorcycle in the back of his truck and took me home, what kind of person does this type of deed, that person is an example of kindness.”

To San Juan Capistrano locals, he will always be remembered as the little old man in the “Tijuana’ bright blue house at the north end of town. He literally shared the fruits of his labor to residents that would ask for it. He was a hard yet simple man, educated in the ways of God and nature. He gave us a love and passion for music that is evident in all his children. He gave us a one of a kind sense of humor, and a little bit of a temper too. He gave us more then these lines can contain. He was mine, he was ours, he was “my dad” to us all. He was everyone’s friend, a great man and father, grandfather to 29 grandchildren and 17 great grandchildren.

He fulfilled everything he was supposed to do. A good and faithful servant of God and now Ignacio belongs to Him and can claim his reward in heaven. We love you, we will miss you, and thank God for Ignacio and all the years we had him.

8 responses to Ignacio A. Lujano