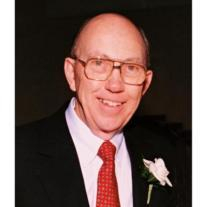 Howard, the son of Leslie and Paul Kelly, M.D., was born and raised in St. Paul, Minnesota. He earned the rank of Eagle Scout in his high school years. He attended the University of Minnesota and was a member of Beta Theta Pi fraternity. He volunteered for the Army Air Corps in 1942 and served until 1945. Subsequently he returned to the University of Minnesota to earn a B.S. in Psychology. He had a long and varied career in aviation, culminating at Lockheed Aircraft Corp. as a training and production test pilot. Howard and his wife, Winifred, retired to Orange County, CA in 1974. He and Winifred spent many happy hours with his family as well as with friends. His favorite pastime was golf, and he was quite good at it.