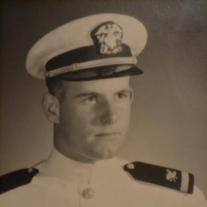 Howard Reynolds Beazell passed away on Tuesday, February 20th 2013 in Bear Valley Community Hospital. He was a California native. He was born in Santa Monica on February 2nd 1935 to Howard Lawson and Cathryn Reynolds Beazell. He lived inmany locations in his lifetime, all being in Southern California.

He graduated from Claremont Men’s College (now Claremont McKenna College) with a Finance Degree. Right out of college, he went to work for Marble Mortgage Company then United California Bank then First Interstate Bank.

Mr. Beazell retired from First Interstate Bank in about 1990 as a Vice President.
He served his country in the United States Navy for 30 years, both activity duty and reserves. He retired as a Lieutenant Commander in 1995.

Mr. Beazell married Janet Marie Gulsby in 1958 to 1995 when she passed away from cancer. He then married Margaret Jean Yokee in 1996 .