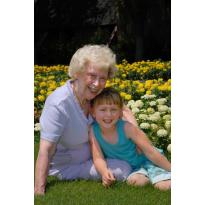 Hilda Louise Dreyer was born to Hans and Lucille Dreyer on May 5, 1916 in Brookfield, Missouri. After high school she attended business college. After college she worked for the U.S. Department of Agriculture until she met and married Roy M. Jarrett Jr.

During WWII Mrs. Jarrett worked as a secretary in a factory producing planes. After the war the couple began a family. Mrs. Jarrett became a homemaker. To them were born, Nancy Louise, Janis Kay, and Paul Arnold. Mrs. Jarrett was active in the Parent Teachers Association and other voluntary opportunities.

Mrs. Jarrett was involved in the wider community as well. She founded the Epilepsy Society of Greater Kansas City, and developed a fund raising campaign to promote the organization. She was also active as a Sunday school teacher. After a move to Des Moines, Iowa, Mrs. Jarrett took up the challenge of part-time church secretary. Here too she returned to full time employment as an executive secretary to the president of Better Homes and Gardens Magazine.

In 1959 the family moved to California and Mrs. Jarrett again returned to her role as homemaker. After the death of her husband in 1969, Mrs. Jarrett entered the business world once again. She worked as executive secretary for the U.S. Department of Agriculture, Agriculture Research for 26 years. This very successful career led to many opportunities for advancement. She was transferred to Fresno, California in the 1974 where she resided for 30 years.

In 1982 Hilda Jarrett met and married Cyril J. Farrell. Mr. and Mrs. Farrell were both retired and enjoyed many memorable trips. They were on the first cruise ship to visit The People’s Republic of China and enjoyed that trip immensely. The couple enjoyed their life together and were active in their church and helped wherever needed. Mrs. Farrell served her community by volunteering at St. Agnes Medical Center for many years. She served as President of the Service Guild and enjoyed giving to others.