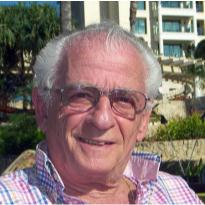 Herman passed away due to complications from his 3rd lung cancer surgery. He was born in Holland.

Herman and his sister, Kitty, were separated and put into hiding during WWII for five years. They survived but lost 62 members of their family in the Holocaust. After the war, they were sent to Israel on the ship ‘Exodus’ and lived on a Kibbutz. Herman served in the Israeli Navy and fought in the Gaza Strip War. In his 20’s he returned to Holland and founded a very successful clothing business, Habak International. He sold his company and retired before the age of 50. Herman emigrated to California in 1981.

He is survived by the love of his life of twenty years, Ann Williams; two children from a previous marriage, son Ilan Bak Karin and daughter Vivian Bak Monique; and his older sister Kitty Bak Jo. Herman was like a Father to Ann’s children Claire Craig Robert and Scott Williams Christina. Herman was the greatly loved Opa to Ann’s grandchildren Alex, Trevor and Ashleigh Craig, and Amanda and Hailey Williams. Herman was loved by everyone he knew for his kindness and sense of humor. He was adored by his family and his passing leaves a void in our hearts forever.

Private Services for the family will be held at El Toro Memorial Park. Memorials may be made to the American Cancer Society.