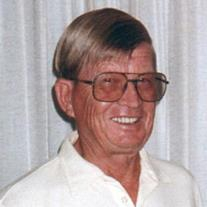 Herb was born January 15, 1924 in Beloit, Wisconsin to Julia & Hulbert Sigwell. In December 1941 Herb was a senior in high school when WW2 started with the bombing of Pearl Harbor in Hawaii. ‘As a consequence, everyone graduated very fast that year, no one was held back.,” said Herb.

It was in his senior year of high school that Herb met his future bride Barbara Brittan at the local roller rink across from her home where she lived with her father George Brittan. They became friends and had long wonderful conversations. When Herb went into the Navy, they wrote to each other regularly then became engaged on Herb’s 30-day leave.

Herb was Aviation Ordinance Man First Class in the Navy during World War II. He was mainly in the Marshall Islands and the Marianna Islands where they saw lots of action. In the Marianna Islands, a 16′ shell came through the bow and a 100 lb. bomb in the fantail, splitting the seams in the bottom of the ship. They took on water and had to bail with a bucket brigade to keep afloat for three days until a tanker helped pump the water out. It took them 2 days to get back to the Marianna Islands, then returned to Pearl Harbor to reform. Their ship then picked up his squadron in the Admiralty Islands – 2 degrees from the equator and so hot you couldn’t get on the wings of the airplane! They were also involved in the battle of Leyte Gulf in the Philippines, but typhoons delayed the trip as waves were coming over the flight deck. Herb and his crew were mainly on sub patrol on a torpedo bomber aircraft TBM. This type of plane was built to carry twelve 100 1b. bombs for close air support on landings or depth charges for sub patrol or one torpedo in the Bombay. The plane had a 3-man crew that consisted of Herb in the gun turret, a radioman and a pilot. During one mission, the Japanese fleet came down on them so hard they were unable to land back on the carrier. They had to set down on a half completed airstrip on the beach at Lady Gulf, as did other planes. The landing was so difficult that several planes hit the sand dune at the end of the runway and flipped over. This kept the ground crew busy bulldozing planes out of the way to make room for incoming planes. However, Herb’s plane landed safely and their pilot didn’t flip over when Herb told the pilot to’ drag the plane as you never dragged it before.’ It was after this mission came to an end that everyone was assigned to a ship and went back out to sea. It seems there wasn’t an accurate accounting of who was on what ship, which led to the ‘Missing in Action’ (MIA) letter that Herb’s father received. Ironically, Herb was already back home getting married to Barbara Brittan in Milwaukee. It was during his next mission, between San Diego and Honolulu that the war ended. Herb had over a month’s layover before receiving his honorable discharge in San Diego and then returning home.

After having two children and living nine years in Beloit, Roscoe and Rockford (Illinois), Herb, Barbara, Jeri and Patti Sigwell moved to sunny California in 1954. They chose the warm climate of California to raise their children. (Herb knows because he had a 54 Chevy and Herb knows his cars.)

After first settling in Glendale, they relocated to Santa Ana where they remained until 1971. Herb was a Teamster, worked in the coffee business, dairy industry, food industry and liquor industry. They vacationed all over California, Arizona and then Hawaii in 1966. After many trips to Hawaii, they moved to Lahaina, Hawaii in 1971. Herb managed McKesson Liquor, worked at Lahaina Upholstery and then bought a station wagon to operate his own taxi service. His wife, Barbara, passed away in 1985, and soon Herb moved back to California to be close to his daughters. First, he moved to Huntington Beach, then San Diego and finally settled in Oceanside until later years where he relocated in San Juan Capistrano.

Favorite things: Camping in California, his two daughters, all the cars he owned and golfing.

Private celebration of life on Lei Day, Friday, May 1, with scattering of ashes at
sea in Lahaina, Maui. No flowers, Memorial Donations to American Cancer Society.