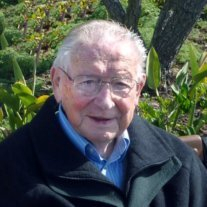 Herbert Alex Winter (“Opa”) passed away peacefully at his home in Laguna Hills, California on March 21st, 2013. Herbert was born in Essen, Germany to Paula and Johann Winter on April 2nd 1925. He married Helen Finch in Munich on August 6th, 1952 and immigrated to the United States to complete his education and to start a family. Herbert had a gift for foreign language and was fluent in German, English, French, and Italian. He was a French professor at California State University, Long Beach from 1960 to 1989 where he was highly respected by both his students and fellow faculty. Herbert had a lively and restless mind and delighted in learning about many things. He passed on this intellectual curiosity to his children and grandchildren, inspiring them to explore the world and see it from many different perspectives. Opa was also the “communication hub” of the family, always sharing emails and photos describing the accomplishments and pursuits of his extended family. He will be greatly missed.

He was preceded in death by his parents, 2 brothers Hans and Franz Winter, and sister Anni Warm.

Funeral services will be held at St. Nicholas Catholic Church in Laguna Woods, California at 11 am on Wednesday, March 27th.

3 responses to Herbert A. Winter