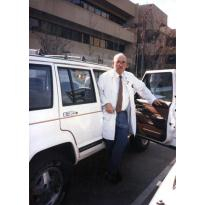 Henry R. Stiepel, M.D. passed away peacefully on Monday, April 26, 2010. Dr. Stiepel was born in 1922 in Marklissa, Germany. He immigrated to the United States with his wife, Christine Stiepel, M.D. whom he met in medical school in Leipzig in 1951. He practiced internal medicine with Kaiser Permanente for 40 years until his full retirement in 1996. Dr. Stiepel was respected and admired by his colleagues and patients alike for his untiring care of his patients. After retirement, he traveled extensively throughout the world with his wife. His dedication to his family was total. Nothing meant more to him, and he gave his family everything he had. He will be sorely missed.

Dr. Stiepel is survived by his two sons, Henry and John; his daughter-in-law, Franca; his two grandsons, Henry and Leigh; his brother Erhard; and his sisters-in-law, Margaret Stiepel and Sigrid Lusmann.

Viewing will be at 10:00 a.m. and the funeral mass will be held at 10:30 a.m., both on Wednesday, May 5 at San Francisco Solano Catholic Church, 22082 Antonio Parkway, Rancho Santa Margarita. Interment will follow immediately at Good Shepherd Cemetery in Huntington Beach.

In lieu of flowers, the family requests that donations be made in Dr. Stiepel’s name to the Foundation for PSP/CBD and Related Brain Diseases, 11350 McCormick Road, Suite 906, Hunt Valley MD 21031 or www.curepsp.org.