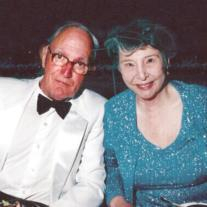 Henry (Hank) Vermill, 88, of Laguna Woods, passed away peacefully on November 29, 2014. Hank joins his loving wife of nearly 50 years, Lisa Anne Johnson Vermill who passed on March 22, 2012. Hank was born in the Netherlands on May 21, 1926 (as Henry John Vermuelen) and he immigrated to the United States after serving in World War II. Hank received his Masters from Northwestern University and he was an electrical engineer throughout his career. Hank enjoyed boating, bowling and bridge. He loved the ocean and taking cruises with his wife and family.

He is survived by his son Marc Vermill and his wife Erika Vermill, daughter Angela Vermill MacPhail and her husband David MacPhail, and his granddaughter Anneliese MacPhail.

We will miss our Dad – but we take comfort in knowing that he is with our Mom now. They will forever live in our hearts.

In lieu of flowers, there is a memoriam through the Alzheimers Foundation of America under Henry John Vermill. https://secure3.4agoodcause.com/../fundraisers/memorial1.aspx.