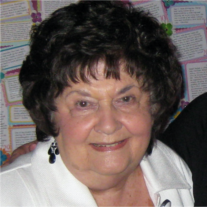 Helena (Helen) Mierzwinski (nee Bielava), 87, of Montreal, Quebec, Canada, beloved mother, grandmother, great-grandmother, and sister, died on May 25th, 2016. Helen unexpectedly died of natural causes at Mission Viejo Hospital, Mission Viejo, California. She was born on December 9, 1928 in Montreal, to Susanna Harewicz, a homemaker, and Joseph Bielava, a tailor.
Helen grew up in Montreal with her parents and three sisters. She went to St. Brendan’s school, worked in sales at different department stores, and married William (Bill) Walter Mierzwinski in 1948, who predeceased her in 1981. During their time together, they worked very hard and were dedicated to raising their only daughter, Louise, who was also born in Montreal.
Helen loved to be around people. She had a great smile, loved to tell or listen to a joke, and enjoyed music and dancing. She could really polka! Probably, more than anything, she loved to cook and bake. She is known by family and friends for her special desserts: chocolate cake with marshmallow icing (also known as seven-minute frosting); grandma’s apple pie; her special pecan pie; cream puffs; banana nut bread; and her 1-2-3-4 cake with fudgy caramel icing. She loved to crochet and she made beautiful afghans for each of her great-grandchildren to use and treasure. In Montreal, Helen volunteered at church functions such as church bazaars and cooking Thanksgiving dinners for those less fortunate.
After her husband’s passing, Helen came to live in Huntington Beach, California, to be with her daughter, Louise, her son-in-law, Brian, and her five grandchildren. Grandma Helen was devoted to her grandchildren. She cooked for them and their friends, walked them to school, taught them how to knit and crochet, played cards and games with them, and spent time talking with them. After living 10 years in California, she returned to Montreal to live together with her elderly mother. Most recently, prior to Thanksgiving, 2013, Helen arrived back in California to once again be surrounded by those she loved dearly, her daughter, her grandchildren, and her great-grandchildren.
Helen’s family cherishes all the wonderful good times and memories we had together at engagement parties, bridal showers, weddings, baby showers, christenings, birthdays, Thanksgivings, Christmases, and Easters —- and more. We hold her dearly in our hearts and will not forget.
Helen is survived by her daughter Louise Philis Lillian Murphy (nee Mierzwinski), her son-in-law, Brian Graham James Murphy; her five grandchildren, Deborah Elaine married to Nizar George Najm; Laurie Catherine married to Rodney Mellott; Cheryl Susan married to Gregory Cooper Wood; James Stephen Robert Murphy married to Amber Mohiuddin; and Christina Liane married to Michael Parrett. In addition, she is survived by 13 great-grandchildren: Sara Nadia, Jonah Nizar, Maxen Nizar, Savannah Summer, Chase Roy, Jake Cooper, Violet Louise, Leo Cooper, Tristan James Ronan, Ruby Shea Helena, River Charlotte Ayla, Kyle Aiden, and Alyssa Rose. She is also survived by her sisters Louise Rose (of Montreal) and Lillian (of London, Ontario).
Visitation will be at O’Connor Mortuary, 25301 Alicia Pkwy, Laguna Hills, CA 92653 on May 31, 2016 and June 1, 2016 from 7:00 pm to 9:00 pm. A special vigil service will be held on May 31, 2016, beginning at 7:30 pm. The Catholic funeral mass will be held for Helen at San Francisco Solano Catholic Church, 22082 Antonio Parkway, Rancho Santo Margarita, California 92688-1933 on June 2, 2016, 10:30 am.
A private family cremation will take place on June 3, 2016 at 10:00 am at O’Connor Crematory. Helen’s ashes will be brought to Montreal where a memorial mass will be held on July 12, 2016 at St. Brendan’s Catholic church. Following the mass, her ashes will be interred at Notre Dame de Neiges cemetery in Montreal. Flowers may be sent to the O’Connor Mortuary or monetary donations may be made to Helen’s family or to your favorite charity.